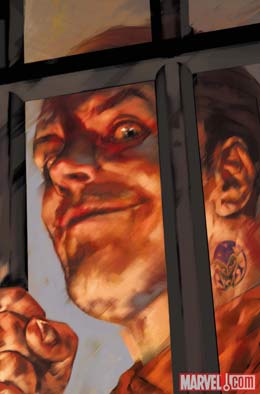 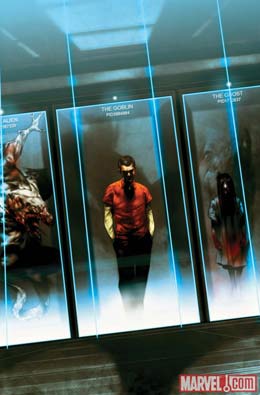 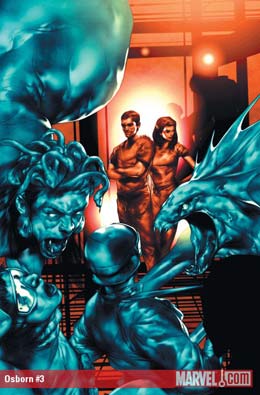 What a very excellent story. This is a comic book that I picked up because I love both DeConnick’s writing and Rios’ art and want to support them. I am not a Norman Osborn fan, and I pretty much could care less about him. Same with the whole Siege plotline. And this amazing creative team does not disappoint in taking a character I don’t like and making an awesome comic book.

Osborn is a bad dude, and thankfully, DeConnick doesn’t waste time recapping everything evil he’s ever done. Instead, we get a spider in his cell — which he eventually squishes between his fingers — to remind us of his nemesis Spider-Man. And we have some politicians who want to send him away forever without trial, without an insanity defense, without even formal charges. They serve as the quick, oh, yeah, Osborn did defy the president and declare war on Asgard.

I love this secret cellblock that DeConnick sets up with the ultra-creepy inmates. The contrast between Martin, the prison guard who hates them, and Father Coulmier, the priest there to help them worked well. Especially when it’s revealed that Father Coulmier may not be as a priestly or good as previously thought. And who doesn’t love a good religious and political scandal?

Norah the plucky reporter works well too. She reminds me a lot of Lois Lane (or the things I love about Lois), especially as she tries to get insight into Norman from none other than Peter Parker. She also serves as a nice foil to who Ben has become. I’m really interested to see where her story goes.

Ellis really has a way of writing detached creepy characters. And June is nothing if not detached and bent on carving the world into her view.

Her origin story is the perfect set-up of the catalyst for her fall and why she continues to seek no redemption. I love how she starts off with the hope of every scientist — to better the world — and then comes down on ridding the world of imperfects.

June’s obsession with Edward Wynne and her equal obsession with perfection played perfectly together. I loved that she ran into Osborn randomly at a party, but they didn’t like one another. And it was brilliant how Wynne rejected June’s attempt to “fix” him and how she killed him for it.

My favorite panels were the last two ones where after she tells her interview-style story, she offers up her hand to shake, but the psychologists don’t take her hand and one notes the sharpness of her nails.

DeConnick writes my favorite Norman Osborn hands down. Had she been writing the main Marvel comics to come out co-starring him in the last several years, I would’ve been reading all of them. I love how cold, calm, collected, and sinister her Osborn is. I never was able to fully buy him being an out-of-control psychopath, except maybe in those early, throwing Gwen Stacey off bridges years.

A very interesting twist that Norman does not know he has a messianic-cult following until Coulmier informs him.

Norah Winters is growing on me. Of course, I’ve always been fond of the intrepid female reporter who goes about sticking her nose into everyone’s business and getting into hot water. I hope that she’s able to save herself in the end. And get her big scoop.

I’m a little disappointed that Xirdal was killed off so quickly. However, I love that she saw them all as murders and herself as killing in defense of her children. It makes this comic book feel that much realer that perhaps one of the “evilest of the evil” would actually not be as evil as sentenced. Or in this case, permanently detained. I also like how the scene established Coulmier as a murderer.

I’m very interested to see how this story will continue to pan out.

This comic book miniseries continues to rock my socks off. I’m loving how very much Oz with superpowers and aliens it is. Made of awesome. My only slight disappoint is still Xirdal’s death. Though I do understand the point that it served narratively.

I love Senator Sondra Muffoletto, and what a fully realized character DeConnick has made her in this series. She really stood out in this issue. I loved Sondra taking care of her staff and explaining how leadership in politics worked through metaphors of hamburgers and lions. The interns burger-chain hats gave the comic a nice touch of innocence as the act of wearing the hats is child-like and reminds me of Jughead in the Archie comics. The hats pointedly asked who are the innocents in this tale: the people that Sondra serves.

And yes, Sondra flinched. She flinched big time. I thought it was a nice realistic touch that the minority woman senator would be the one to take the fall; even though the blame could be spread around, a lot.

Norah Winters, you are being set up big time.

I loved Rois’ art in the fight scenes. The perfect blend between gore and action without getting too graphic. The scene where Osborn proves himself could’ve been too gory or too cartoony, but Rois hits it perfectly.

While Norman winning and taking control was obvious, I did like that it was Coulmier who saw Norah and pointed her out to him.