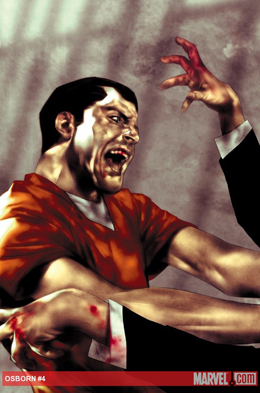 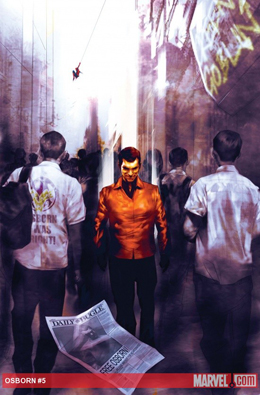 This book continues to be amazing. This is possibly the best comic book that I’ve read this year, and it’s definitely the best one from either of the big two publishers being printed.

I have to say that I’m really loving Nora, the intrepid reporter, being pitted against Osborn, the egomaniacal psychopath. And I do enjoy how they both need each other to some extent and are completely being played. Of course, a political creature like Osborn knows both what good use the press can be put to and what politician to call when he’s in hot water. Or is that surrounded by water?

What I did not see coming was Carney Rives coming back from the dead. But I suppose it makes a lot of sense.

I love Nora saying she must’ve incurred the wrath of God and how Osborn assures her it’s just an adventure.

Of course, Osborn abandoned the prison, and wow, that was some cold writing by DeConnick as Father Coulmier blew up himself and the rest of the prison at the end. I also like that his cult was about bring about the Anti-Christ (Osborn) in order to prove his faith to be true. Seems like a sick, but very current twist with all the apocalyptic religious zealots currently thinking the world’s going to end.

Wow, did this series just rock. In her review on Fantastic Fangirls, Sigrid calls this book an adult book, in that way that adult books should be: “a story that deals in themes and images relevant to adults.” DeConnick hits it out of the park.

Out of all the miniseries I’ve read recently, Osborn is one that came to a very satisfying ending. It was perfect for the book, and it kept the greater Marvel universe still in motion for future writers to play with Osborn.

I continue to love Sondra and her confrontation in the Senate. She is still playing politics, but this time, she’s playing not the lions’ game, but perhaps the real reason she got into politics: to do good. And yes, she knows every moment that she’s losing her battle. William Morrison’s happy face is just terrifying under Rios and Cloonan’s art.

I adore the lingering horror of knowing not that June will eventually get Osborn free by using the system, but that June and her fellow inmates, who were so evil to get special cells in an evil-of-evil, off-the-grid prison, are free to do harm again. And that all of them are up to their old tricks.

Poor Norah. She needs a t-shirt that says, I could’ve got the story of the century, but instead all I got was this broken arm and a missing memory. I do like her speech at the end about how if you don’t fight evil, then you really just join them. And how if you aren’t evil, you get low-pay and bad coffee.

I really hope that this book propels DeConnick and Rios into the spotlight, because both of them are fabulous creators, and I can’t wait to read either of their next projects. I’m hoping for another deliciously adult story from DeConnick.