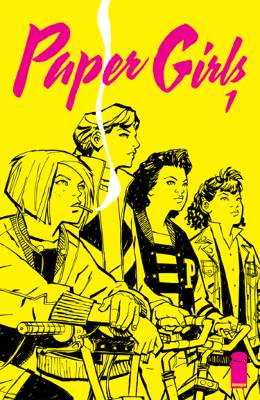 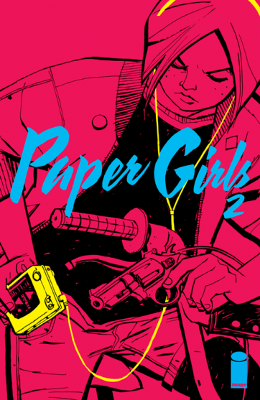 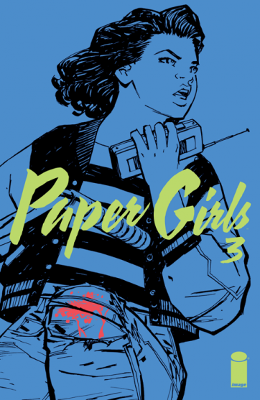 This is the first time I’ve ever read a comic book by Vaughan in single issues. Usually I always pick them up in the trades, and I’m not sure this is the right choice for my reading.

I do have to hand it to Vaughan for always picking a great artists on his book. Chiang is awesome artist, and his art on Wonder Woman was some of my favorite. (Despite the run itself being extra disappointing.)

Erin as a main character is great. I like how headstrong she is. How brave. And how protective she is of her sister, especially after the opening dream sequence. (I also wonder if it wasn’t a teaser and play for those who know Vaughan only from his Saga work.)

However, this issue has too many things going on. First, I don’t believe that teenagers would be roaming the neighborhood at 4:40am as Erin’s delivering her papers. Especially just to give her hell. That’s not a 4am problem.

I did love Erin meeting the other paper girls. However, I wish they could’ve met in another way, not because they needed to protect each other. (At the same time, yay for girls saving themselves and each other.)

Next we have an officer stopping them for causing problems. MacKenzie being a problem child with a bad attitude. And then we have our ninja aliens (?!) and the discovery of the spaceship (?!). Next we have an Apple symbol! Steve Jobs has alien technology. This seems like far too much. Far too many plots. There are like 12 here.

I’m struggling a lot with this book. There’s too much happening.

The disappearance of people just adds yet another layer. Did it happen when the girls activated the device? Or is there something else searching for people, and it just hasn’t found them since they really haven’t stood still since they went out on their paper run? Too much when we see the kid dressed as a werewolf disappear.

Then there’s a whole bunch of pterodactyls in the sky? Like what?

The entire scene with Alice, MacKenzie’s stepmom, was just…I can’t even. There are wacky, but scary and dangerous aliens and flying dinosaurs, but this is a level of super-seriousness we haven’t seen. (Maybe the scene with the cop in issue #1 came close to this tone, but so far away.) Jesus.

I think I’m going to give this book one more issue to decide whether or not I’m going to continue to read it.

Half-PSA for gun safety and half-PSA against alien abduction? Yeah, the more I read this book, the more I believe that it’s just not for me. Sometimes this happens, and I’m sure that anything by Vaughan and Chiang will continue to thrive. (I really want a book I like where Chiang is doing the art because his art is the best.)

With the end reveal that the initial mummy aliens are teenagers — I assume ones from the future — clearly this book’s meant to be a metaphor about teenagehood and feeling like the world’s gone mad around them. It may even come together finally in a way that I’d even enjoy.

I really wanted to like this book, but just can’t get into it.