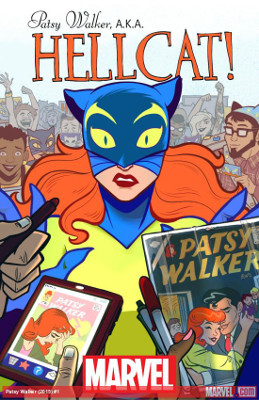 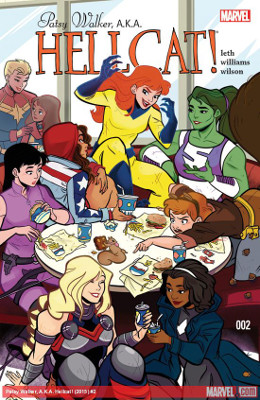 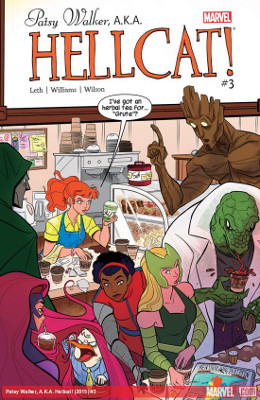 Leth has nailed Patsy’s magnanimous attitude so well here. Of course, I have to wonder how people who only know Patsy from Alias aka Jessica Jones TV show are going to think about this book. This is not Patsy/Trish book whatsoever. This is Patsy from the comics, who ends up in humorous books where she’s an investigator living in a storage closet, formerly married to Satan’s son, and was once a model. But I can’t help but think the title was to attract TV fans, who are going to hate this book. Or at least be very, very confused.

Williams’ art is hit-or-miss for me. But it matches the tone of the book well. Perhaps it makes Patsy a little younger than I think she’d be. (Though the editorial text in the back says she’s in her 20s, I’ve always read her and She-Hulk to be in their 30s, given their careers and relationship histories.) But there are times Williams’ art makes Patsy look more like a teenager and kid than an adult. Though I did notice in those panels, the other characters look the same, so it’s not just Patsy.

Ian as her roommate is great. I love how she just takes him under her wing and works to convince him that robbing bank trucks isn’t how to use his powers. Love that Tom puts him to work with the boxes of books. I always enjoy books where writers bring in a full cast of characters to give them a rounded out life.

This book continues to be pretty fun and cute. The pacing, however, is a little off and seems to jump around time spans, especially on Patsy’s first day in retail.

The retail scene was definitely only a little exaggerated. Especially the 17-year-old who supervised Patsy and fired her at the end of the shift. It being a crop-top shop was pretty cheeky. Too true to the worst styles of today’s mall fashions.

Petty thievery doesn’t seem like something a major magic player would be interested in. I mean, can’t you just conjure up some kickass boots.

Hedy tracking Patsy down at a mall seemed a little ridiculous. I’m glad Patsy pointed this out, but yeah, ridiculous.

I love Patsy calling all her gal pals together. However, Carol didn’t show up at all. It’s nice to see a group of women there to support each other. Though I do wonder how Leth chose these characters to be in this scene. Yes, some of them are friends, but Hawkeye, Miss America, and Squirrel Girl seem a little out of left field.

This issue was both adorable and terrible. Federigo Ravina’s powers to control bed bugs are some of the most disgusting powers I’ve seen among comic characters. It is funny that both Patsy and Tom find him so attractive.

While this took us off Patsy’s temporary job hunt and tracking down Casiolena, it worked nicely to build up Patsy’s world further. Not to mention, it gives us other characters with powers for Patsy to use since I’m not convinced that all the women heroes we saw in the last issue will be in this book.

Williams’ art is fun. She’s getting more deft with each issue. Loving the artwork.

Those were definitely magical bed bugs given that they didn’t stick around. If I was Doctor Strange and my friends came to my door with bed bugs, I’d make them strip, shower, and launder their clothing. (This actually happened one time and that’s exactly what I requested.)

There’s no way I could’ve gone against Federgio. Gross.