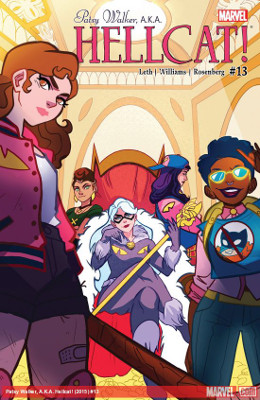 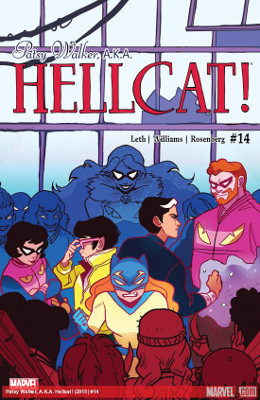 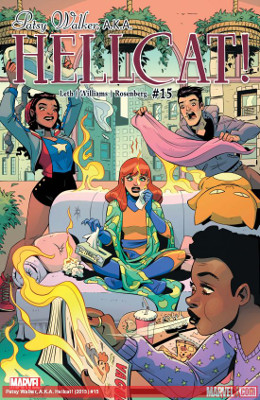 This is still not my favorite storyline. I still don’t understand why Black Cat would be targeting Patsy or really why she’s expanded her normal steal and grab solo act.

I am really glad to have it further explained that those talons Black Cat stole have magical powers and can control people. Now Bailey going evil is understandable! Especially since it seemed like it was an artist mistake in the last issue.

(Also, really Jubilee has the kid? Things I cannot keep track of. Or understand.)

I wasn’t a huge fan of all the scenes inside Bailey’s bag. Jubilee being hungry and Patsy bleeding wasn’t exactly big stakes. At no point did I actually think anyone was going to open a vein for Jubilee or that she’d force someone.

So Zoe didn’t know Ian’s bisexual? Or maybe she really didn’t think he was? I can’t tell. But I figure that’s her shock.

Tom under the spell cracks me up. All evil gangs should have fabulous gay men on their crews. (You know, in universes that have equal and good representations of queer people as people and everyone is gay.)

I still don’t understand Black Cat’s motivations for going after Patsy and her friends. It seems personal in a very impersonal way.

Williams’ pencils seem rushed here. She’s not always one for detailed backgrounds, but this book seemed extra sparse. Especially the scenes in Ian’s and Patsy’s apartment, like they aren’t that poor.

The ultimate fight with everyone was a bit anti-climatic. Not enough sass from Tom. Though Bailey (Attache) having to clean up the mess due to having a big bag was pretty adorable.

The part I did like was Zoe’s and Ian’s conversation. It was great to see him confront Zoe’s biphobia, and how she was emotionally unsupportive of him during his coming out process. It makes it really seem like he’s ready for a better relationship with Tom.

Tom getting emotional at the end was just hearts.

Mr. Sniffles was freaking cute. Especially as a manifestation of all of Patsy’s fears. Well, some of them anyway. I love how she ends up realizing that since he’s part of her, they would get along. And that she can tell him her worries. It’s so correct that there are many more scary things out in the world than the immediate threat to a couple people by a giant fear-based tiger.

I liked that this plot builds on a random plot point of Patsy being injured while in Bailey’s magical bag. It shows a lot about how Leth as a writer can weave continuity and new plots from what’s already happened. I don’t know if this was pre-planned, but it was nice to see that build. (Especially since I assumed it was just a bad gag in issue 13.)

Sharon as the exhausted, but good natured landlady is forever adorable. I like how she feels there would be less damage if she rented to college students compared to superheroes. At least, her building wouldn’t disappear due to magical sneezes.

The multi-holiday party to celebrate all the ones they missed while fighting baddies was a pretty great mashup.

I’m still disappointed that this title is canceled. It’s been of the my favorite comic books that I most look forward to reading. I guess that I have two issues left to savor.