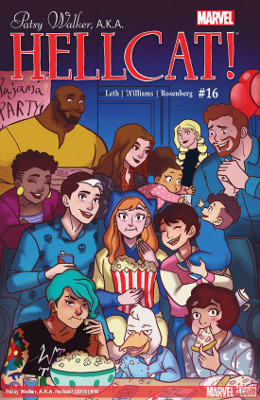 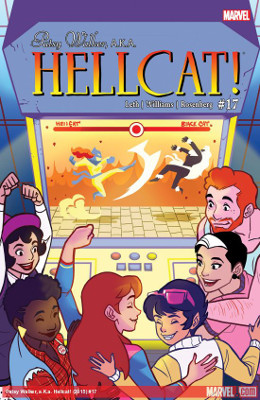 I forgot to mention last issue that I love America in her Canadian costume. That is a great gag in the book. It always seemed odd to me that America in particular chose the American flag to be her costume when she is from another dimension completely. (The new America comic book kind of works through this. And yes, I get America is her name.)

Glad to see that Mr. Snuffles is back. And that Hedy has him after all these years! Patsy’s mom didn’t just toss him out with the trash.

Oh, I like this idea that Patsy’s flu has to do with her traveling to hell and then to Bailey’s bag and having emotional stress on top of it. Benny, the demon who’s also Hedy’s boyfriend, working as Patsy’s therapist was too funny. It was nice to see Patsy resolve some of her stress around Jen leaving her (and almost dying). Not to mention all the other changes in her life, and putting some old pain — like her rivalry with Hedy — away.

I can’t get enough of Hedy and Benny. Maybe they can go on a double-date with Tom and Ian.

I am kind of surprised that Damien didn’t do worse to Hedy than send her to Benny’s hell dimension.

I’m going to miss this crew.

Crying forever. I’m so sad this book is ending. Seriously, I had feels twice during this final issues. Time one with Jen’s letter, and time two seeing them all together at the end.

I love the odd couple banter routines between Patsy and Ian and their best friend and roomie situation. They are adorable. And omg, did Williams did wonder with Pasty’s room. Mr. Snuffles! Mermaid blanket! Such great little details.

And then there’s Tom’s bear face pajamas. Best ever.

Tom: “You could buy my store with that. Hell, you could buy half of Brooklyn. Or, well, more realistically, maybe like, half a Whole Foods.”

But seriously, Jen’s letter was so touching, and a great point to wrap-up Patsy’s continued angst about Jen not wanting to be her friend anymore. Or not needing her.

I can 100% get behind a comic about them going to the mall. Loved the throwback jokes to Jubilee being the queen of the mall. Plus, her comment about how it’s such a great place for a vampire without all those pesky windows in the shops.

Outfit splash pages are something I love, and 80s comics, like The Sensational She-Hulk did so well. They are a lost treasure. Those outfits were adorable on all of them. But especially the updated looks for Patsy.

The pretend vampires were cute. Especially when it was revealed that the girls were kind of in love with each other. Jubilee’s smartass response to Patsy’s claim that she’s so straight was hilarious.

And then they all hung out around a cat fountain.

Not I’m going to cry again. Cry while I look at the photos of cats with the comic in the letters section. I will miss seeing everyone’s cats hang out with copies of Patsy Walker.