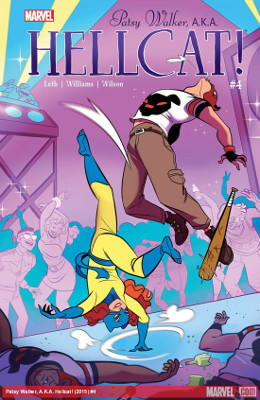 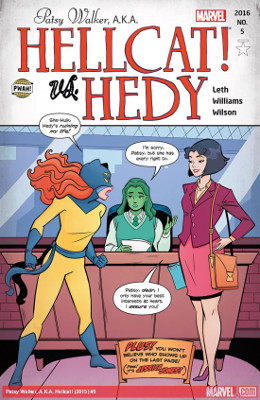 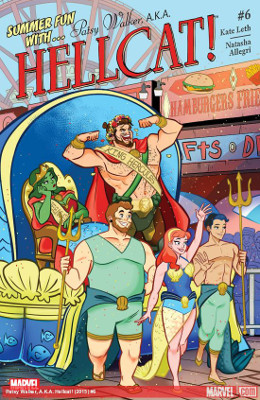 It’s an interesting contrast to see Patsy so fangirled by about everyone in this book. Including the seemingly very popular herself Tara Tam. There’s definitely a pile of gold that Hedy’s sitting on.

I have to say that pacing of this issue feels off. Of course, Patsy’s trying to work, fighting Casiolena, and supposed to be at her lawyer’s at the same time. It’s too convenient to create more chaos in Patsy’s life. Especially if Patsy called on the other heroes to help her out.

Pretty sure Valkyrie could handle Casiolena on her own.

I did enjoy Patsy debunking all of Casiolena’s promises to her recruits. Interesting that people would want to move to Asgard.

Patsy lecture to Casiolena about how compassion isn’t a weakness and how she believes in giving people second chances really made this issue. Loved it a lot. It was a nice conclusion to for a big bad’s ending arc.

There’s definitely something about Hedy we aren’t seeing. I’m really looking forward to the inclusion of Jessica Jones, given alternative universe Patsy in the TV show. Interested in how Leth might address that. Though I didn’t know Jessica had become a private detective again.

Love how no one bothered untying Poppo. I thought the gag would get old as the comic continued, but it didn’t. Especially with the reveal that he called Ian. And then She-Hulk got all mad that she wasn’t Patsy’s emergency contact.

Tom saying that both Hedy and Patsy were the worst when they were teens was the best. Not to mention the joke about Patsy’s new office being a remodeled closet. That she’s still not allowed to live in.

This issue was super cute. Allegri’s art is just adorable, if a bit jarring. And I’m glad that we got to see Patsy kicking back and having some fun with her friends. Especially after the big battle last issue.

Though everyone knows that anytime you go to an arcade in the Marvel U, you must fight Arcade. Who honestly seemed to be missing some of his trademark evilness and powers here. It was more like he wanted to have some friends, but didn’t know how to make them so happened upon some superheroes on a break.

Oh, Tom, I loved how much he acknowledged that he never wanted to be the damsel in distress again. That lampshading was great. Plus, Ian’s crush on him is adorable too.

Both She-Hulk and Patsy being able to beat Arcade at his games without their superpowers also fit. Of course, Hellcat’s super strong and Jen’s actually good at aiming and dodging. Just because you can take a punch, doesn’t mean you should.

My favorite moment was Ian pointing out that he’s bisexual. I could draw hearts all over that visibility scene.