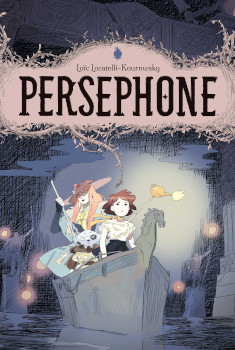 Gardening saves the world. This is basically what happens in Persephone. This is a lovely retelling of Persephone and Demeter’s mythical mother-daughter relationship by Locatelli-Kournwsky. Unlike other readers, I was happy that Hades was dead when the book started. This allows the book to be about women and more focused on Persephone’s personal identity and growth.

The artwork is magnificent to set up the lush world of Eleusis (the surface) and Hades. The details made the story incredibly immersive. I do wish Persephone hadn’t been a white girl, especially since Locatelli-Kournwsky did a few characters of color, such as Persephone’s lovely friend Cyana. Unfortunately, the world had more non-human characters than people of color, making this book still way too white.

Since plants play an important role, I appreciated the fanciful gardens and ideas of otherwordly plants. Locatelli-Kournwsky’s art isn’t photo realistic, giving them lots of room to play. And there’s a cat character, who’s also a warrior, and like I’m not going to love that.

Demeter balanced herself as a mother in a way that I don’t think we get to see often. Here she’s a warrior mage, and she’s the adopted mother of Persephone. We later find out how Demeter found Persephone and a secret. (Though I’m still not sure about the curse or what it was.) I loved the fierce way Demeter loved Persephone. Too often, especially in fairy tale and mythological-based stories, adoptive or step-parents are portrayed as being horrible to their non-biological children, so it was lovely to see this change. Demeter loves her daughter, end of story. That love is played upon in a similar way to the original myth.

Mirtha’s and Mitha’s were too close in spelling. There were only a few named characters in the entire book, so I don’t see why they were named similarly.

I appreciated seeing Persephone’s moods go up and down while she’s trapped in Hades. Given that right now, we’re all trapped in our homes during a global pandemic, this extra resonated with me. She’s trapped. But she also must find something to do. Persephone already loves botany; gardening is something many people are turning to right now, and it was lovely to see her do the same with her time.

The climactic ending felt right. Same with the resolutions and the positions of all the characters. I do think there’s city-state questions when it comes to Hades and how much Lord Rhadamanthus needs the gates to be open for trade. Societies depend on each other, and even it seems like Hades needs Eleusis more than Eleusis needs it, they both need each other to function properly. It’s also only been 15 years — which means many people will have a cultural memory of a time when things were good between the two places.

Persephone seems to set us up for a sequel. But it may just set us up to dream the best for Persephone, Demeter, and all the other characters. Cheers to a positive and hopeful outlook.