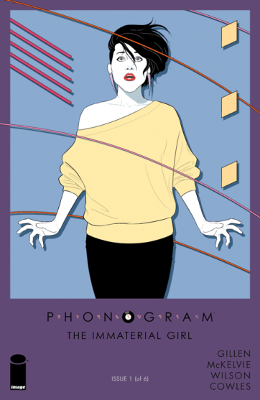 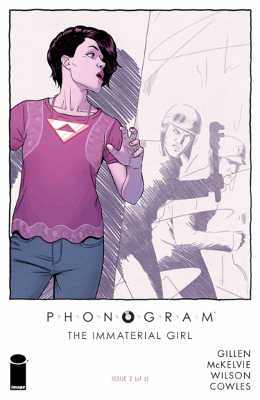 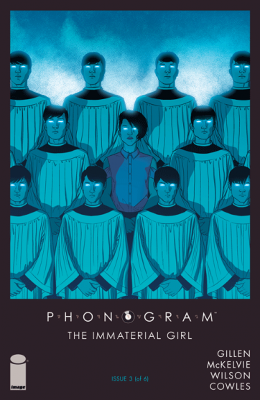 If there ever was a book I got major hipster about, it’s this one. Actually, when my boyfriend brought it home in “his” to-read pile and was casually like “are you going to read this?”, I went on a hipster rant about how I got my copy of the first volume when it was hot off the presses from Gillen and McKelvie themselves at SDCC 2007, the week it came out. And then I had to stop myself…especially when he told he got it for me, not himself, and was giving me a hard time.

I am WAY TOO serious.

Definitely interested in learning more about the magic that’s trapping part of Emily’s personality in the TV, specifically looks like ’80s MTV videos, and just what her powers are. I like the disclaimer that most music mages don’t actually improve their lives, but they keep doing it.

Lady Vox is also nice person to add some variety. Completely endearing with her live sex acts on stage at their coven gathering — which then turned into a music magazine.

Seth punching people was pretty fun. Mostly that Emily was cheering him on while David recoiled with emo-boy horror.

I’m so glad that Gillen and McKelvie have picked this ‘verse up again. And that they are now seemingly older, wiser, and more mature in their writing. Can’t wait.

This issue seemed like a great indulgence. A fun one, but certainly an indulgence. Emily traveling through music videos from the 1980s. Madonna’s “Material Girl” was definitely my favorite; McKelvie’s art was a great tribute to it. I love how he adapts Emily to every situation.

Claire’s going to cause some problem and mayhem as she destroys the coven. David may actually look like a good guy compared to her. I just hope he’s not the one who saves her.

Claire does, however, need a wardrobe update. She’s a little too Death from Sandman. Also, I get that Emily/Claire possesses magic, but seriously, intern guy didn’t notice that her hair style changed in a massive growing direction. (Though maybe he just considers it magic.)

I do hope there’s more action in the next issue.

Again, this book came off a pretentious and self-indulgent, and that doesn’t mean I don’t like it, it’s more a statement of fact. Just that they have to have a glossary to tell you all the obscure and obvious music references in the back glares the indulgence right back into your face. And I’m not saying that I don’t appreciate the guide because I don’t get Gillen and McKelvie’s every reference.

It’s funny because the book sets you up to like Emily more than Claire. You trust Emily as the main character. She doesn’t try to destroy the coven, like Claire. But this issue highlights everything wrong with Emily, all the traits she gave away as a whole person to become Emily and grow her powers. Especially when Claire points out Emily’s lack of integrity, and you’re like ‘oh, yeah.’

Interesting that little Emily-Claire seems to have much more power as a whole person than split in two. Unsurprising, but a smart move from Gillen.

Loved McKelvie’s art in the journal-style. It worked well to get across a spellbook into visual format, and of course, show off all those references as they love to do.

The part about having to give up one of the Daves was hilarious. As if you can only know so many people. I really hope Claire doesn’t sleep with Indie Dave because ewww.