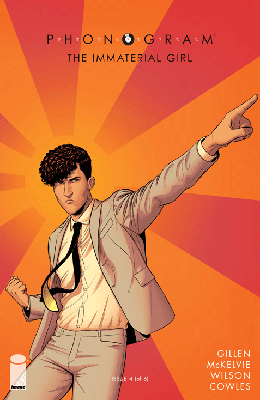 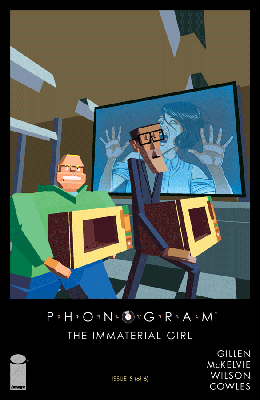 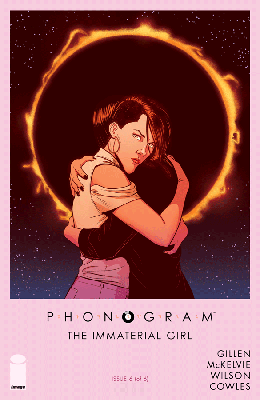 “Seemingly irrelevantly” really does describe this entire issue. Especially when we’re working in a limited six issue arc. There’s not space to piss around in as it were. I guess we’ll have to wait to see if this has pay off.

The thing about this issue is that it’s actually pretty good. Though music pretension, masterbatory self-referrances, and the like are still abound. This book always bring me back to my giant imposter syndrome as a writer and an English major: metaphors. But more the pay-off of them. As a critic, I’m much better at catch them than I am at writing them.

Lloyd is 100% completely some hipster version of Lloyd Dobbler so I already completely hate that fuck. So basic. I really loved when Laura ripped his arm off.

Yeah, so this issue didn’t inspire me enough to listen to The Long Blondes. Next time, Gillen, just write about Pulp, who write the best songs to William Shatner to.

The ending story with Lloyd in his Dexy’s coat was pretty dang good. Like a solid punchline.

Oh, David Kohl, you are a terrible man, who we all want to punch in the face. The truth is that we all know David Kohls of the world. (Gillen brilliantly uses the name David in these books to show a repeat type of guy in different variations. (True story, at the place I work, almost 10% of the workforce is named ‘Dave.’)) He’s selfish and out for his own pleasure, while never really realizing he is nothing in the world and has left nothing but a semen stain.

Sorry, was that too mean?

To his credit, David is given one last chance to grow when he stares directly into the abyss that is Indie Dave, his doppleganger. Indie Dave who hasn’t learned anything expect that Emily is Claire now, who he doesn’t say no to sex from. (Seriously, Claire, you can do way better.)

David takes this last moment to realize he may have shit in his life, but he’s going to help a friend. That will be his mark on the world. Of course, he realizes then what a shithole his life is when he meets up with the other former coven members and sees that they’ve all got something besides music and magic to live for.

Also David sending Kid-With-Knife to NYC, the one place he’s dreamed of, but never been, was a pretty kind gesture.

This is the only ending besides death that we could have. Well, Claire’s death did happen. The rest of the characters, they realize that it’s time to grow up, accept responsibility, and change.

Loved the amalgamation of Lady Gaga being Emily’s guide, but ultimately Emily being her own King Behind the Screen or Michael Jackson channeler. Pretty snarky that the day Emily came back, Jackson dies.

Don’t worry, Gillen, you aren’t the only one who likes “Modern Love.” It’s very danceable. Even if the ending is far too meta and something I’ve seen used before in books. However, given how autobiographical this book is for Gillen, I can forgive this final indulgence.

The closing scenes with David Kohl and Emily worked so well. Especially when she tells him that they’ll never see each other again. McKelvie is masterful in how he ages his characters. They aren’t stuck in some immortal paper life. But instead, they are changing or dying. And Emily really learning how to love herself.

But don’t worry, there are always others waiting to pay the price of magic like Laura and Lloyd.