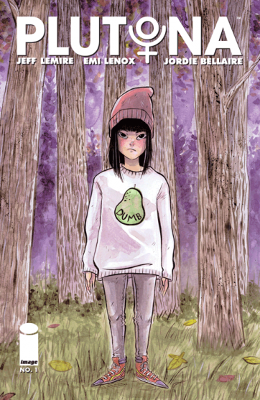 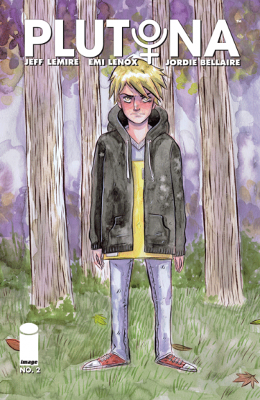 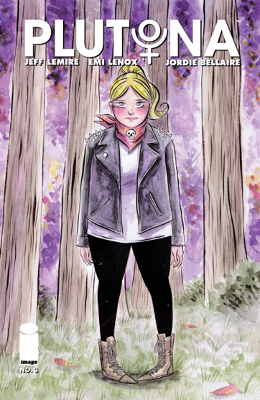 This book is both cute and disturbing at the same time. In that children are vulnerable, want people to like them, and are jerks to each other. These children are cruel to each other, while they also want to be friends. In fact, they long for the attentions of each other.

Diane is the one I feel the most sorry for. Mei isn’t a great friend to her here, and Diane seems like a sweet and caring person. But, of course, as they find Plutona’s body, they’re going to need a leader and it will probably be Mei. And Mike is both her literal and figurative punching bag.

Of course, then there’s Ray, who’s the typical abused child acting out to bully the other children. I did like his moment of connection with Teddy. Teddy also seems rather sweet.

I’m interested to see how the creators deal with Plutona’s death, especially since they set her up with a conflict between her job, motherhood, and superheroing. And Plutona as a legacy character. Does that mean her daughter will take the mantel?

The one thing this book does brilliantly is capture the world and voices of children-teenagers. This is exactly the kind of thought process they’d each go through if they did find a superhero’s dead body in the woods.

Of course, Mei is the one who thinks everyone wants to be famous.

And, of course, Teddy can’t sleep and sneaks off into the woods again to Plutona’s body. There’s something he didn’t tell the other children about her powers.

I like how Lenox and Lemire continue to explore how their home lives directly affect what they do when they’re away from home. This book works so hard on building the world and using that world to build characterization that it’s seamless. And makes for a very enjoyable read.

And Teddy and Mike are trying to gain Plutona’s powers. Of course, they each in different ways want to be superheroes. I wonder if this blood joining will actually work. It’s not like anyone in this world knows how superheroes came about anyway.

In general, I feel really bad for Plutona and for her daughter. Plutona had a lot of people depending on her.

Mei and Ray flirting with each other is kind of cute. In the way that you can see yourself, as a teen, making that kind of bad decision. Especially in how Mei starts treating Diane even more badly to impress Ray. The addition of text messages into this world adds another layer of reality.

We’ll see what happens as Teddy and Mike share secrets, Mei and Ray continue to get closer, and poor Diane…