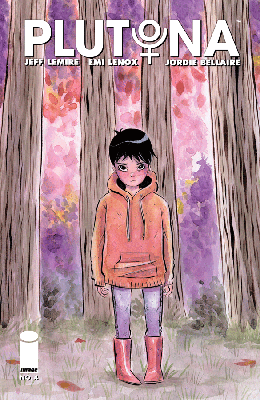 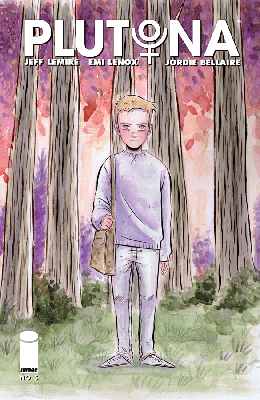 While this issue wasn’t as strong as the others, it was a needed one. Of course, the other kids needed to learn what Terry and Mike were up to in the forest. Of course, they needed to rediscover Plutona’s body.

We also needed to start asking the question of if Plutona’s daughter would inherit her powers now that she’s dead.

Ray and Mie definitely are heading down that first bad romance with the bad boy style stereotype. Though since Ray’s a fully developed character, we can understand more about him. In many ways, this book seems like a homage to Freaks and Geeks, only with superheroes.

Diane is the one who’s losing out, which means she’s likely the one to finally get the adults involved. Or the police. Or leave some kind of anonymous tip.

Damn that was some dark shit I wasn’t expecting. I mean, it had to go to a dark place. I really hope Plutona continues beyond this initial five issue story.

I did not see Terry going mad over wanting superpowers. Perhaps this is an origin for a supervillain. Or how he ends up with powers. Or what Plutona leaves undone.

Sure kids aren’t the brightest, but I did figure they could tell if someone was dead or not. Maybe Plutona was in some kind of regeneration comca. You’d think she’d want to know more about why the kids cut her fingers.

Oh, Diane, she may have hit Terry on the head to save herself and her friends. It was clear self-defense. But she’s not going to walk away from this. I liked where both Ray and Mie ended up. Who knows about Mike though.