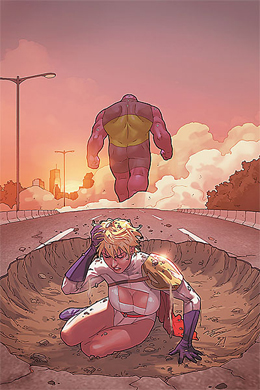 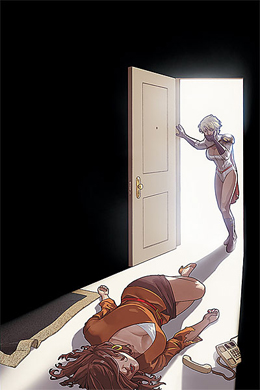 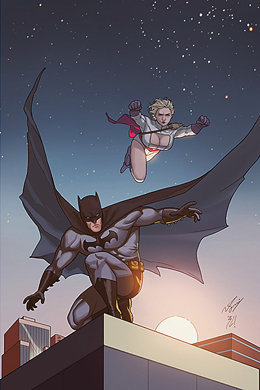 This comic felt like a lot of filler. Which as the supposed conclusion to the work’s most dangerous weapon storyline and Winick’s first mini-arc was a big let down.

Most of #15, Power Girl spends her day chasing around Crash, the weapon’s dealer turned giant purple killing machine, and fighting him. She does do some problem solving in that she discovers he was created by the U.S. military. (Which I thought the whole setup was that he was an unknown alien weapon?) I suppose my thought if that if I wanted to read this much smash-and-bash I’d read a (Man-)Hulk title or buy a big crossover.

While some good detective work, Kara’s blackmail of Nicholas seemed a little out-of-character. If anything, she always really saved her employees from super-trouble. I also don’t believe that she couldn’t contact anyone from the JSA.

Figures that Crash’s powers would run out/down in a certain numbers of hours. Same with Maxwell Lord’s appearance to drag him off.

My favorite part about this comic is the art. Okay, I love, love what Amanda Conner did on this book, but Basri is no slouch. He does a great job with Power Girl and her often unwieldy costume. It would be so easy to dive into a world of just looking at her ass or her boob window. I’m so happy that DC has kept a talented artist for this book.

That said, what’s really dragging this book down is Winick’s plot. Another plotline where Power Girl mostly smash-and-bashes and blackmails Nicholas. Another issue where Nicholas basically saves her butt, and now they’re pretending not to flirt with each other. Then finding Donna Anderson dead.

The only redeeming part was Nicholas calling out Power Girl on having the worst secret identity ever. I mean, at least Clark wears glasses. And also his comment on why she just couldn’t call Batman to be her computer guy and her pointing out that Batman built the place they’re using for her secret lair.

Dude, I miss Terra and her going to the movies. 🙁

This is really getting three stars because I really enjoyed Winick’s characterization of Dick as Batman. I liked the Batman being the guest star and helping out Power Girl. I thought their team dynamics worked really well. However, I’m not reading Power Girl because I like Dick as Batman or Winick writing Batman. I’m reading it because I love Power Girl.

But once again, this issue is just another smash-and-bash. I’m rather tired of it. Fatigued. This series is really getting close to me taking it off my pull list. I’m just so bored, and Batman shouldn’t be the only non-boring part of this issue.

If you’re disheartened by the review, I suggest Power Girl Vol. 2: Aliens & Apes by Jimmy Palmiotti and Justin Gray

as it’s awesome. Plus, you’ll be supporting this blog.