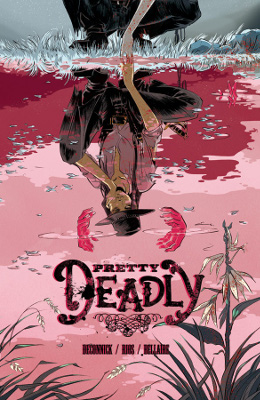 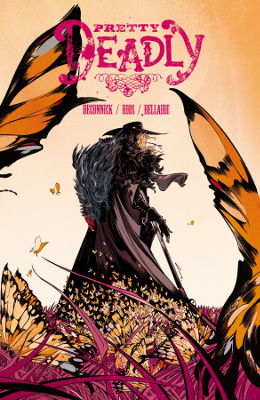 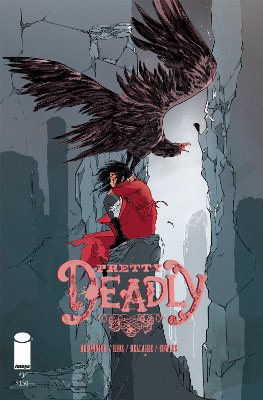 This book makes me happy. I love both Rios’ art and DeConnick’s writing. And I am a fan of vengeance stories and those set in the West, when they don’t marginalize women. This is a story that I expect and adore from both creators.

Interesting to set up the narrator as Bones Bunny, a rabbit that I’m assuming Ginny shot. I love the myth already behind the story. About love and the vengeance of Death’s daughter. Or perhaps what Ginny’s chosen to do.

Sissy’s vulture cloak is beautifully drawn by Rios. And I’m surprised and pleased by the diverse setting in this West. I’m tired of creators who whitewash the world or create fantasy lands — and this is certainly one — and then claim they need to follow some weird racial history of populations. (I’m looking at you, Game of Thrones.)

I am super intrigued by what exactly Big Alice is after. I don’t think anyone’s sorry that Johnny was shot.

Can’t wait for the next issue.

This book is definitely full of blood. I’m not sure how I feel about Big Alice completely killing a bunch of people and burning down Sarah’s house. Though it certainly sets the tone, and we find out that Alice is on Death’s payroll and trying to get Ginny to come home. Seems that Death will stop at nothing to make sure that happens.

Though I am glad that Sarah, Cyrus, and the other child did live, while the other characters met their deaths. Loved that Cyrus called Ginny. Even if she was already likely to appear.

Not sure what I think of the Night Maid and the Day Maid. I suppose they’ll be further woven into the story as it continues.

Didn’t get Lily’s motivations for still fucking Johnny. Sure he must be paying (otherwise, the madame would toss him out on his ass), but he seems to be a less powerful spot. Not that Lily doesn’t remind him that he’s injured and an ass. He certainly knows more than he’s telling.

I want to learn more about Fox and Sissy’s connection and also Sissy and Ginny’s.

I feel like I should’ve seen Fox and Mason being the same man coming. But didn’t see that the beast born in the river of blood would be Sissy. (I assume that woman in the river of blood is Sarah?) Which means that Ginny’s vengeance hunt is for Fox. However, he and Sissy spreading the story of what happened and how to summon Ginny seems perhaps a little backwards.

Still don’t like Johnny. Hoping that Molly isn’t only a raven.

Flash floods may happen quickly, but it seems like they should’ve had a bit more warning. Not that I blame Sissy for demanding some answers about what’s going on. Mutt has eyeballs after all. There’s nothing worse than a character getting secrets kept from her for her own good.

Go on adventure in the magical West, and buy Pretty Deadly Volume 1