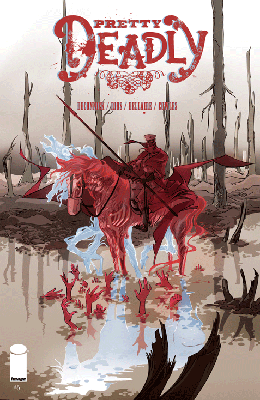 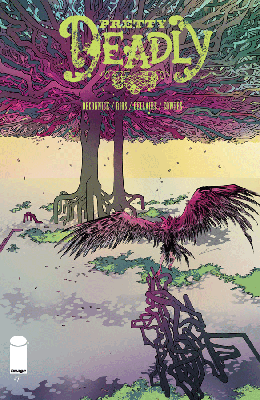 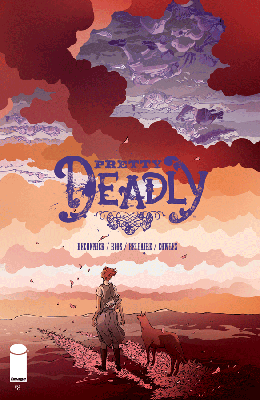 This book remains possibly one of the most beautiful books out there. Rios’ art is gorgeous, and the way that DeConnick and her worked together creates a very unique style of story. It almost feels like both are done by the same person, which gives a closer feel to the book. I do hope the pacing in this new story arc is better than the first run.

Oh, Sarah. This scene is so hard from me. It’s so real when you’re taking care of a loved one who’s dying. Too real and too close. Very much feel for Verine.

Of course, Fox came back to take Sarah to the underworld. He would. It’s nice to know that their adventures did lead to his real death, given the supernatural elements of this story.

Elbert’s jacket reminds me a lot of Sissy’s cape.

Super interesting to see that Ginny and Alice are traveling and on missions together. What’s their dynamic like now? How long have they been together?

So I’m not sure where this story is going. Except to see how Alice and Ginny bring an end to World War I. (Though I appreciate the fact that Sissy tells Fox she doesn’t know either.)

But you should be reading this book because the art’s luscious. Downright gorgeous and beautiful. The different kinds of smokes are beyond brilliant and the way Rios puts more than smoke in the big page layouts is beyond brilliant.

I am interested to learn about these other reapers. And how things got this out-of-control under the Old Death’s regime. I assume it got so because he was so obsessed with Fox’s lady.

Loved Cyrus and his rat.

As much as we want Cyrus to live here, no one escapes the Reapers, no one escapes the consequences of War. Even though Deconnick and Rios weave a fable through the narrative and give us the introduction with Bones Bunny and Butterfly, this issue is a non-stop look at the horror fest of World War I.

I adored the switching of Molly and Johnny, opposites in their animal forms, and yet seemingly without a mission except to give us a fable.

While I appreciate the poetry of this book, I want to learn more about the characters. I want to know how the changes in the world from when we first met them until World War I. They seem to still sport their Western gear. Do Reapers get stuck in times? In fashions? How does time work in the Garden?

Is War a random Reaper who got out of control because of the Death’s problems in volume 1? Or does he have his own agenda? What will that mean for Sissy? Shouldn’t Ginny as Death’s daughter have more power than War? Or does War feed on the deaths?