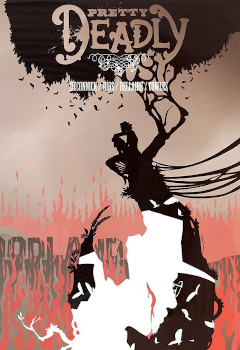 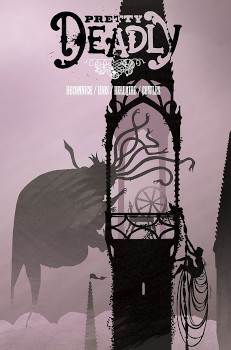 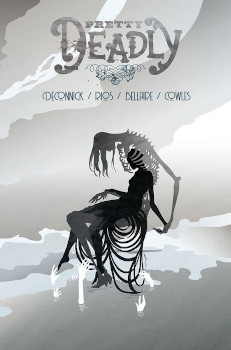 These Pretty Deadly stories always start high-level and then dig down. However, there is a rhythm to it. My guess here is that Frank, son of Sarah, will be dragged into hunting down these reapers who killed his niece either because she was hunting them or telling their stories. Maybe they even haunted her.

Rios shows off her immense talents here, once again molding her style to the atmosphere of the tale. We’re in Los Angeles, in old Hollywood. Clara’s films of the dance with the reapers were haunting, and that was 100% thanks to Rios’ art, Bellaire’s colors, and Cowles’ letters. This atmosphere story could not be told without the accompanying illustration. The words don’t work without the art.

Here Frank is smart, however. Ginny may be scary, but she has a code she operates by, and Clara was messing with forces that do not want to be bound by any rules.

I’m not so sure what I think of Ginny’s look here. There’s undoubtedly a Western-style to her still, but her updated look for this era and place isn’t quite hitting me right.

The art remains top-notch, but this story isn’t grabbing me the way it should be. In the garden, Sissy is dealing with trying to be a good gardener in the same way the sheep wants to be a good mother, and Frank wants to be a good uncle. Even if it’s already somewhat implied that he failed to do so because Clara is dead, but at least he can solve her murder.

I loved the whole crow look when Sissy leans down to gather water from the river. Rio’s layouts are incredibly inventive, and you can tell the fun she has in building them and the care she takes. I also love the art deco baths, especially the elegance combined with making waterboarding look beautiful in the next scene.

Bellaire’s coloring in the flashbacks with Clara is brilliant. Jack Kaufman’s greed and Clara’s creativity in that yellow-green and black situation was so impactful.

I never thought Ginny would come to Frank if it wasn’t a rogue reaper who’d taken Clara’s soul. Or even possibly was directly responsible for her death. This makes me curious as to why Ginny arrives at this conclusion at the issue’s end as if it’s the first time.

The touch of how Kaufman had no idea which department Clara worked in was a smart commentary on her race and gender. Of course, Kaufman paid no attention to her at large before she showed her brilliance and made him a bunch of money on two movies.

This was my favorite issue of the series so far. The stories in the World Garden seemed to tie into the larger thematic issues of this book, and we understand the motivations better of Frank and Ginny. Neither of them are motivated by selflessness or the pure need to solve Clara’s death.

Rios’ art was beyond beautiful and haunting there. I loved the glass vivarium and how Rios showed Sissy building and balancing it. Fox seemed more useful here than before. I’d never noticed Sissy’s word balloons specificity, but I did in this scene, and it was brilliant work from Cowles.

The other part I loved was the Reaper of Thirst. That mouth and tongue were chilling, and I liked the effect more than the early sketches in the backmatter, where Rios covered her eyes only to see through her mouth. The way Thirst’s pink dress acted like another tongue was creepy and effective. You could see how people got tangled up in her.

I’m kind of interested to learn more about Frank’s first encounter with Thirst. Did he get away because he wanted something she couldn’t give? Or because of his family’s experience with Reapers?

Clara has a bit less innocence here, which considering no victims are perfect victims, this was more realistic and gave her some agency she lacked. It also gave us insight into how Frank may be a little complicit in her death. Though I’m not sure I needed it spelled out by Thirst that Clara came to her because she was running from something else. The art showed this.

Will Ginny round-up Thirst when she grabs the other one? It’s not like Thirst is going anywhere.