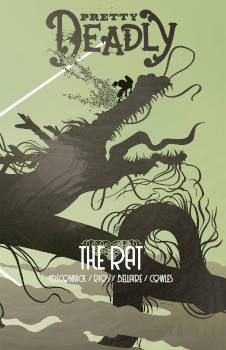 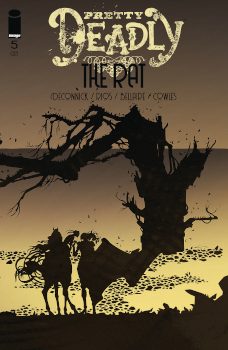 Here’s Ginny’s motivation for saying no more to Frank, because Obsession, the reaper who killed Clara, is onto Frank. In many ways, Rio’s art tells far more of the story than DeConnick’s words, which I found myself trying to read too quickly to get back to the art.

Obsession’s work is pitch-perfect as this dragon creature that can wrap all around you. And it’s got Frank in his obsession to find Clara’s killer. The hint that Frank was trapped with Thirst due to a heroin addiction was clearer in the art than anywhere else, including the last issue, which makes even more sense why Clara would’ve known to go to Thirst to find him.

I don’t think I understood how Ginny and Big Alice were connected until this issue. But I don’t quite understand why those two would have each other when the other Reapers seemingly work alone.

Ginny’s mouth seemed drawn so tightly, in a way that determined women look, and I loved the movements of the bottoms of her pants during the fighting scenes.

Will Frank be able to pick up the pieces? Will Clara go to the Garden to rest? And yes, Obsession just trapped himself in with Ginny. That seems like a poor choice, or a badger and coyote team-up choice.

Okay, I missed that Obsession isn’t a Reaper. Instead, Obsession is a shadow, a concept, and a victim of his own obsessions to collect.

Clara finally telling her own story with her own words was powerful. Powerful enough, it was the right story beat to have her forgive all the characters, including Frank and herself, in her own story before walking away from Obsession with Sissy and back into the Garden. Frank, on his own, back in LA.

Yeah, there was no way Sissy was staying as part of Obsession’s collection for more than two seconds.

DeConnick posits forgiveness as a way to move beyond your trauma to heal yourself, and while I’m sure some of this comes from her sobriety, it doesn’t read as a lecture. Sissy is a neutral Death. One who seemingly cares to keep the world going and the Garden balanced. When we have a complicated relationship with those who’ve died, it can be hard to take those next forgiving steps.

I did really like this framing of Obsession as having no meaning at the end. Collections only have the value we assign them, and when you are done with your obsession, done collecting, what do you have left? I cannot help but wonder if these themes aren’t from our consumerism, and frankly, from comic creators who travel to some of the most pro-consumerist places: comic cons. But then there is also the part about forgiving monsters, and how that doesn’t mean you continue allowing the monsters to be monsters or treat you badly.

This story definitely ends on a cliffhanger of sorts. Another volume of Pretty Deadly has already been announced, so leaving Ginny in a precarious place is not surprising.