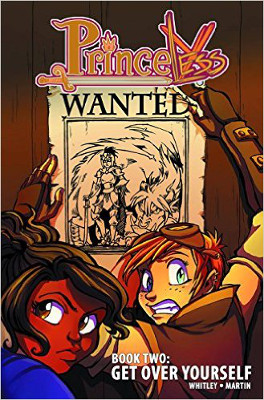 Princeless Vol 2: Get Over Yourself by Jeremy Whitley
Art: Emily Martin

This volume told a lot more story and build a lot more threads of characterization and subplot than the first volume, but it also meant, it was more a fractured storyline. Princeless is still very entertaining and definitely ahead of many other comics in how it looks at gender and racial stereotypes. For sure, I’ll be picking up the next volumes.

In this volume, we meet Adrienne’s older sister Angelica. Angelica seems to love being a princess and having everyone adore her. In fact, a whole cottage industry of adoration of Angelica has sprung up around the tower Angelica was supposedly imprisoned in.

With Angelica, Whitley plays with the idea of the princess whose great beauty draws a crowd. And one who likes being a great beauty and her royal title. We see Adrienne’s idea about who her sister is — a damsel in distress who can’t see the patriarchy keeping her down — disappear over the storyline. For Angelica is fit to be a royal ruler and a queen, but it is Adrienne’s own supposed heroics that bring those qualities out.

Adrienne attempting to fight off Sir Gahiji the Hunter, who honestly is the most competent of all the would-be suitors coming after Adrienne’s supposed killer, showed a different outcome than either of were expecting. Gahiji refused to kill a woman. He just doesn’t see them as worthy enough. So much so that he simply leaves after Adrienne’s face is revealed. It makes you wonder if he’ll even bother to tell the King.

Interesting note about the universe that Angelica’s curse — no one can touch her without her guardian appearing — works no matter the gender, or apparently the relation of who touches her. Of course, Adrienne accidentally activates it.

The battle between the creature and Adrienne results in not only showing Adrienne’s quick thinking and ability to get the town’s people to work together, but moves Angelica from passive princess who allows things to happen around her to a real leader of her people.

As far as the side stories, their mom is definitely the Black Knight and apparently her husband has no clue. Or maybe the King does. He’s a hard character to understand his motivation, or maybe it’s just his arrogance keeping him extra clueless all these years.

The Pirate Princess is certainly going to be a fun character, especially since she implies that her father didn’t lock her up in the tower for a suitor.