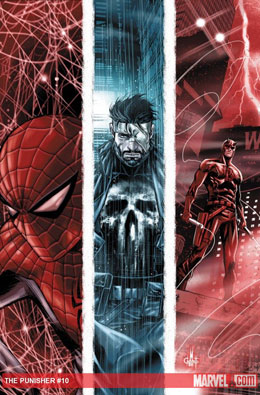 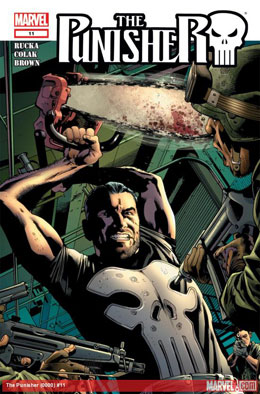 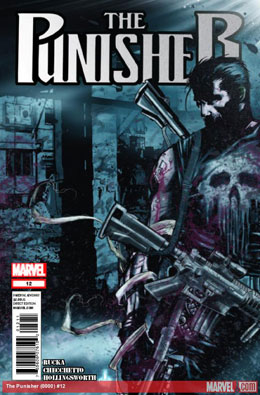 Wow, having Spider-Man in a comic that’s serious with a lot of introverts and those who are the strong, silent type really changes the mood of this book. Spider-Man, he’s just a ball of energy.

Of course, my very favorite part was when Daredevil just casually stopped to deliver a baby in a bad traffic jam and that the father didn’t want Spider-Man anywhere near his daughter or her mother. Best jokes ever about Spider-Man being a creepy spider and Daredevil dressing up like the devil. Yes, “Daredevil” makes a lovely girl’s name. (Side note: I had a boy cat named Dare.)

Though the whole time I figured that Rachel was more of a risk to steal the Omega Drive than Punisher. She’s the one with a specific target and reason. And I feel she’s a bit more determined than Frank. Being healthier probably helps with that.

Ugh. I wish this wasn’t some crossover. I think Rucka did a great job at bringing the readers in and not making me feel like I missed a giant bit of story. However, he did too good of a job making me curious how the whole thing will end. And I’m not keen on picking up the rest of the story. (And won’t, but it was way better than every other “crossover” book I’ve read lately where I was in the firm “heck no” camp.)

Glad to have Checchetto back on art.

Interesting that Bolt has decided to turn himself in for collaborating and giving information to the Punisher. I didn’t think he would, especially for not so huge a violation compared to other stuff.

Poor Charlie Cooper just didn’t have a good date; she’s now having Bolt getting into a lot of trouble. They may not have any dates happening for quite a while.

I don’t think anyone’s upset that Frank and Bolt killed a bunch of zombies. Yeah, Black Talon is alive, but seriously, when in trouble, cops can shoot people.

But what I do love is that for political reasons the police will be covering up Bolt helping the Punisher. Because they don’t want the Punisher to be associated with the police for obvious reasons.

Ooh, this was so cold. Poor Rachel. She is becoming a Punisher. (And I’m trusting Rucka to give her a better title than “Lady Punisher” or something equally, stupidly gendered. Hopefully, Norah comes up with it in the book and spreads it in the papers.) Such a great arc of her storyline.

I love Norah rushing out of bed to meet Rachel. That’s something she’d completely do. Also that she’s sleeping with Ulrich’s nephew. Also something she’d do. How much do I love Norah Winters? A lot. I vote that Rucka writes a comic book all her intrepid reporting. That would be so awesome.

This issue was super intense. I’m really glad that Checchetto’s on pencils for this issue as he conveys darkness of both time and soul in the perfect manner. The hours that they are out as the ones where the rest of the world is asleep (or having sex in Norah’s case). The witching, stormy hours of the night. Love it.

The Punisher’s and Rachel’s fight was perfect. The script was great, and Checchetto’s art just makes it all the better. I loved this. This is how you create a fight scene that tells more about the characters and isn’t just a fight scene because this is a comic book about superheroes and fights happen.

Such a great issue. Loving Rucka’s take on the Punisher as seeing himself as dead and teaching Rachel this lesson.