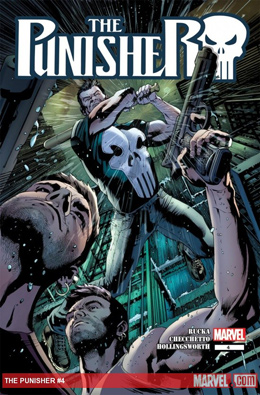 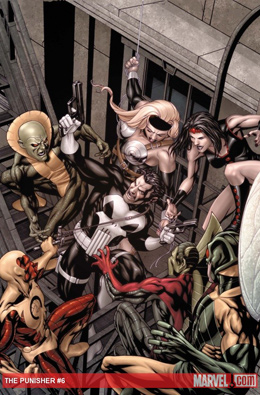 I really liked that we got more background on both who Norah Winters is and how she thinks. Her conversation with Ben, who was clearly thinking about how he never outed Matt Murdock as Dardevil, was perfect. I don’t necessarily think that Norah is in the same situation as Ben was, but I liked the mentorship angle and that Ben trusts her. Even if he can’t put her on TV.

Of course, I don’t think it’s so much that Norah just wants to out where the Punisher’s secret hideout is so much as she wants more of a story. Telling the world where he lives is just a line in a police report. Finding more about him and how he ticks is an actual story. Or it could be.

I’m not quite feeling Rucka’s Punisher, and I’m not quite convinced that Rucka has all the pieces yet. It is kind of interesting that most all we know about the Punisher so far is through other’s eyes. And obviously, there’s going to be some parallel with Rachel Cole’s story. (Lady Punisher anyone? Though hopefully she’ll have a better name than that.)

I really loved this issue a lot. I thought Rucka did a wonderful job making a character study story and advancing the plot enough to not leave us hanging. (I mean, who really wanted to see months and months of Frank healing from the fight? Or just acting like Frank has super healing powers as other writers might or not have him get that beat up to start with?) I think Checchetto also pulled out all stops with his winter wonderland. Lovely.

I love the hints that Rachel’s going rogue herself. Did she take out the Exchange? Or is she following what the Punisher’s doing to the Exchange so she can mimic his patterns?

The comparisons of everyone’s Thanksgiving dinner was really key to talking about who they are. Rachel has no one. Norah would rather chase the story and live the story than be with family. Oscar is definitely the quiet, loner while Walter tries to act like life is completely normal.

Surprisingly, my favorite story in this book was the interactions between the young boy and Frank. I love the assumptions that he makes about Frank, and how Frank’s reactions to them really show a lot of what’s on Frank’s mind and how he views his ‘mission.’ And it was so sweet how the boy brought him Thanksgiving dinner, only to realize that Frank is the Punisher, not a top secret solider and part of a larger sanctioned military.

This comic book just gets better and better. However, it made me super cold with all the snow.

Southworth’s and Clark’s art styles matched up together were interesting. They compliment each other well. And the winter atmosphere fit them perfectly.

I love Rachel and Norah’s friendship. Mostly because I don’t think that Norah would mind that Rachel was digging through her notes for extra clues about the Exchange. In that Norah herself would riffle through Rachel’s notes if she knew.

I’m adoring this idea of Rachel and Frank meeting. And the possible explosion or team-up between them. I cannot wait for the next issue. Is it next month yet? This is going to played out in such an interesting way.