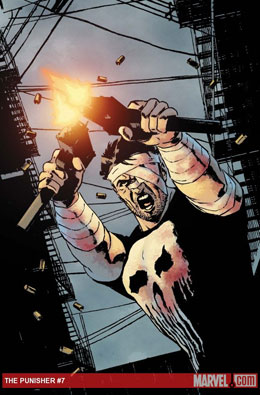 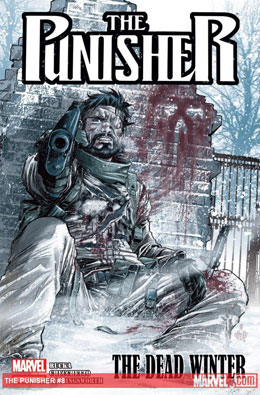 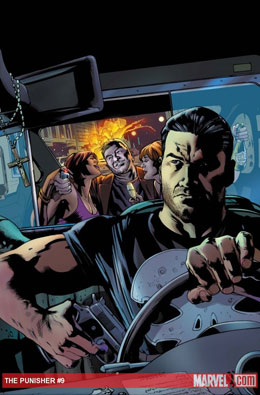 Ooh, Lark’s penciling this comic. Which makes it really more Gotham Central, but in the Marvel U. Of course, you won’t hear me complaining about that. Lark’s pencils work so well with the grit of a city. Plus, he does a wonderful job with expressions, even if the face of the person isn’t the main focus.

I’m slightly disappointed that we didn’t get to see Rachel and Frank’s initial meeting and words to each other. I understand from a creative perspective why Rucka and Lark weren’t going to put a blood-bath into the book, but sometimes I want the dialog of the connection.

I love that Ozzy knows that Walter is feeding the Punisher information and that he’s not going to turn his partner in for it. He just wants it to stop. Ozzy’s story about meeting the Punisher and dealing with superheroes was such a great contrast to Walter’s. A great illustration how two very different viewpoints can be formed about the Punisher as he’s going after super villains.

I also love that they figure out that the Punisher has a friend.

First, I love how Checchetto draws Stephanie Gerard and her face. I love the style he puts into her. Except perhaps those glasses. But otherwise, her style and look is completely wonderful and distinct. Every choice is deliberate to convey what type of woman she is.

I love finally getting to see Rachel and Frank meet each other. At gunpoint. And it is perfect that Frank told her to stay out of his way. He is very much a lone dog.

Oh, Nick Fury and his forgotten hangouts. That the Exchange has found one and is using it is excellent. I’m so happy Rucka’s writing Fury as someone who makes mistakes, unlike a lot of other writers who make Fury some kind of infallible super spy. Not even Fury can be everywhere at once.

Oscar and Walt figuring out that Rachel has been doing her own killing was perfect. As was her demanding that they leave her place.

I do hope that Rachel’s okay. But I don’t see Christian Poulsen surviving much longer.

Wow, I can honestly say that I did not see Frank letting Rachel join in coming. I figured they’d operate around each other for a while long. At least before someone found out about that Rachel had gone all Punisher herself.

Colak’s art isn’t my favorite. It’s a little bland. I suppose it could be worse.

I love Rachel sharpshooting to save Frank after she fell into the trap Christian left for him. Especially with one eye, it’s not surprising that Frank appreciates someone watching his back. At least for a little while.

I’m really interested to see where their partnership goes. Especially with the police on their trail.

Read it for yourself and buy The Punisher Vol. 2