The title of this blog post seems bizarre, but Alison Bechdel is a character in her own autobiographic graphic novel, Fun Home, a play on Funeral Home. (Her father was a funeral home director and high school English teacher.) The novel takes places in non-linear flashbacks to Bechdel’s time in her parents’ home and by in large, her relationship with her father, Bruce Bechdel. 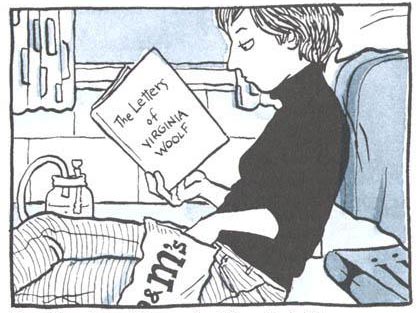 In many ways, I think my literary tastes fall right in line with enjoying this novel. In fact, I read it in an afternoon. (English major as charged.) The Bechdel house is one of books and there are many literary references — from James Joyce to the fable of Icarus — littered throughout the novel.

It’s also a novel about stepping around who we are and keeping secrets. Even before Alison realizes she’s a lesbian, and that her father is gay, they run around each other playing in metaphors and functioning as opposites. While Alison seems to realize that most children act out to their parents through a rebellion of opposition, there’s something different about her daughter-father relationship. No doubt, both father and daughter, identify what they can not name in each other. 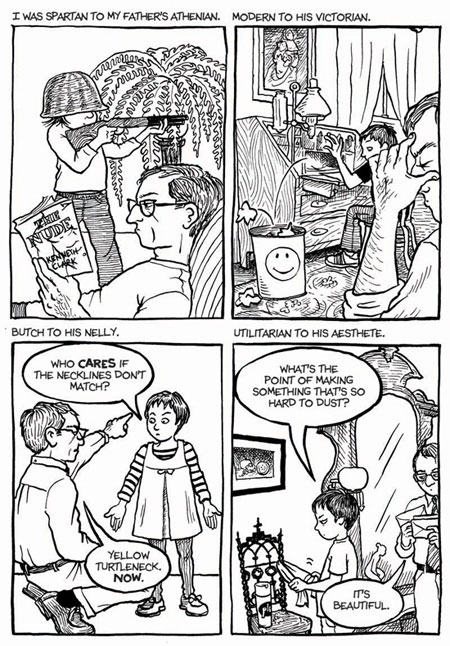 While Fun Home is certainly a serious book, both the non-linear storytelling and Alison’s almost whimsical art keeps the tone light enough. You may cry, but you’ll also no doubt smile at many of the scenes.

Book’s tragedy is Bruce’s death. He’s killed two weeks after his wife asks for a divorce, being hit by a Sunbeam Bread truck. Alison reflects that it could’ve been suicide. This haunts her given that she’s just come out and never had a straight-forward conversation with her father about sexuality.

However, despite their differences, Alison’s reflections clearly show a love for her father and a sorrow and joy that she was able to learn from his life. As a writer and artist, Alison puts together a great graphic novel.