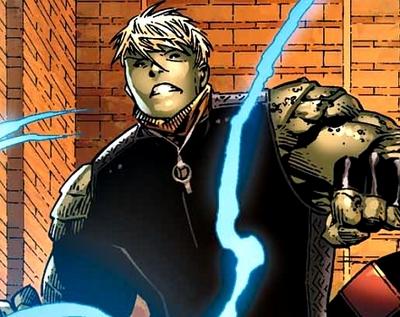 Teddy first appears in Young Avengers where everyone assumes he’s a Hulk, hence his name. In fact, Teddy himself assumes this is where his bulky green powered-up appearance comes from. But Teddy’s not gamma-radiated, instead he’s a Kree-Skrull hybrid with super strength, super healing, and shape-shifting abilities. He’s also romantically involved with teammate Billy Kaplan (Wiccan). 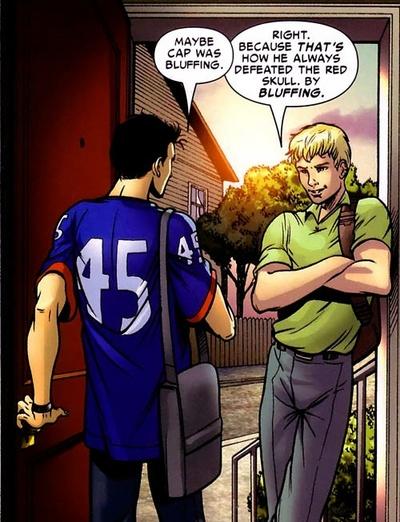 Originally, Hulkling was going to be female and only shape-shifted into a male form to intimidate villains. Rumor has it writer Allen Heinberg thought Marvel wouldn’t let him have a gay couple in the book. However, they did, and Hulkling remained male.

Teddy believed he was raised by his single, human mother. However, when the Young Avengers have an encounter with the Super Skrull Kl’rt, who’s after Teddy, Kl’rt follows Teddy and Billy back to Teddy’s house. There it’s revealed that Teddy’s “mother” is actually his Skrull nurse. (She then dies.)

Teddy’s actually the long-lost secret child of Kree superhero Captain Mar-Vell and Skrull Princess Anelle, which makes Teddy heir to the Skrull throne. Kl’rt wants to take Teddy back to the Skrull Empire to unite their people, but then the Kree also show up to claim Teddy as their own. In the end, Teddy says he will spend half the time with the Kree and the other half with the Skrulls. Only it’s not Teddy who boards the spaceship, but Kl’rt posing as Teddy with hope for peace.

In Young Avengers Presents #2, Teddy goes on a quest to find his father, the newly resurrected Captain Mar-Vell. In truth, Mar-Vell’s actual a Skrull impersonator who’s so deep under cover that he believes himself to be Mar-Vell. Because Mar-Vell never saw Anelle again, he did not know she was pregnant and Teddy’s a complete surprise to him. However, Teddy doesn’t quite find the father and family he’s looking for, when Mar-Vell remains intent to return to the past. 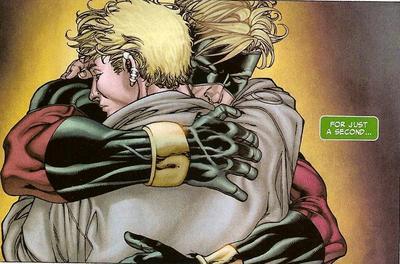 Hulkling has one moment with his father.

I’m hoping that the Young Avengers get another book of their own. I’d love to see Teddy and Billy’s relationship develop further, but mostly, I think this team is worthy of their Avengers title.

Support this blog and weigh in your opinion about what Hulking should do next with his life. You’ll want to start with Young Avengers Volume 1 Sidekicks.