Created by Brian K. Vaughn in Marvel’s Runaways Volume 1 #1, Karolina is part of group of teens, who realize their parents are super villains. They runaway and find out that they all have some sort of superpower. Karolina discovers she’s an alien, specifically a Majesdanian.

Karolina often feels like the freak of group, while at the same time, always getting along with everyone. Before coming out, Karolina’s “freakness” is often attributed to being an extraterrestrial. She finally comes out when she comes onto and is rejected by Nico Minoru, a straight member of Runaways and Karolina’s best friend.

Thankfully, the writers don’t leave her love-life out to pasture, instead Karolina’s her Skrull fiancee Xavin shows up. Yes, Karolina’s evil parents promised her hand in marriage to create a Majesdanian-Skrull peace treaty. Xavin shows up as a man, and Karolina is quick to point out that he’s not her type.

Comic books always have loop-holes, even for relationships, and in Karolina and Xavin’s case, as a Skrull, Xavin can shape-shift. This ability includes shifting to be a woman. (Xavin is later shown to identify as a woman and be comfortable in her skin.) 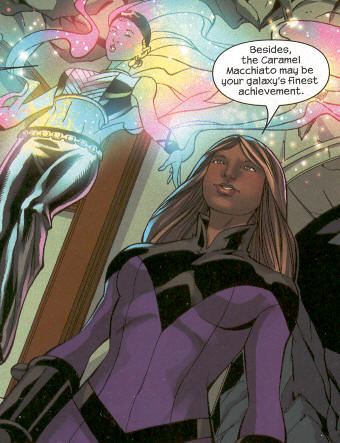 Additionally in this arc, Karolina learns more about her powers, and she and Xavin realize that intergalactic peace is a little more complex than two young women in love. And they come back to be part of the Runaways.

Karolina is really the peace keeper. She keeps everyone together, especially after one of their beloved team members dies, and makes sure everyone’s needs are met. And she’s part of what makes the Runaways one of my favorite comics.