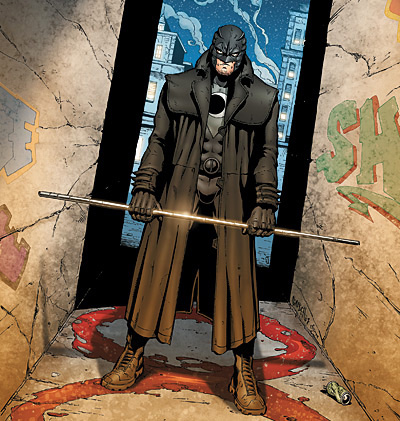 Created by Warren Ellis, Midnighter first appeared in Wildstorm’s Stormwatch Vol 2 #4. Midnighter is a genetically-engineered superhero, who has super healing; implants in his brain which let him predict an opponent’s fighting moves before the battle starts; and other enhancements such as an axillary heart. In other words, he’s the muscle and kills lots of super villains as part of the Authority.

Midnighter is affectionately referred to as the Gay Batman. My response has always been that isn’t Batman the Gay Batman? Also a good difference between Midnighter and Batman is that 1) Midnighter KILLS people; Batman does not 2) Midnighter has no parents and was possibly created in a tube; Batman was a wealthy orphan raised by Alfred and 3) Midnighter has a very successful marriage; Batman gets framed for his girlfriend’s murder.

Besides being a badass, Midnighter also has a family. He’s married to Apollo, another superhero, and they have an adopted superpowered daughter, Jenny Q. When the Authority takes over the United States, Midnighter and Apollo become the most the famous couple in the world and have a celebrity status. 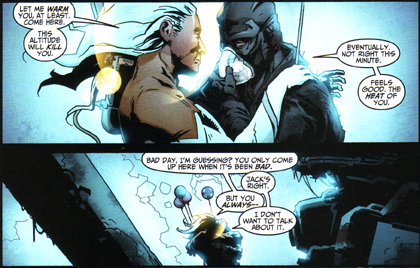 Apollo and Midnighter stealing some moments at the end of the world.

One thing I’ve always loved about Midnighter’s characters is that he’ll do anything for his family. When an entire team of Authority imposers take over the Carrier, only Midnighter and a toddler Jenny escape unharmed. Midnighter then comes back with Jenny and takes out the false team, saving Apollo and everyone else.

Midnighter also has great friendships with his other teammates. He is very close with Angie, the Engineer, and he’s her go-to person for dating advice. He also has some fun sarcastic exchanges with Jack. 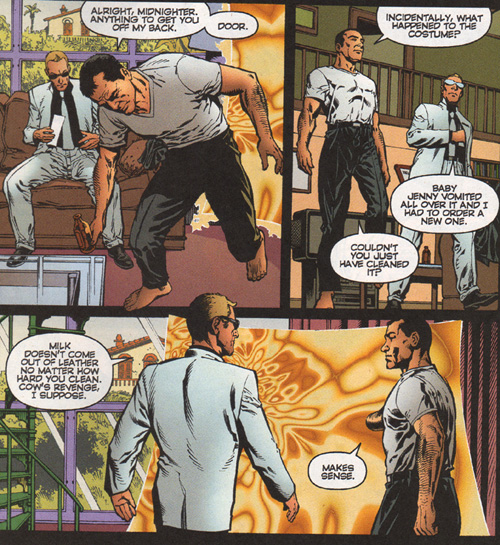 Midnighter and Jack discuss the finer points of leather care and childcare.

In conclusion, Midnighter is awesome. I highly recommend reading the Authority comics, especially Ellis’ run, for anyone looking for a good superhero story and one that has strong LGBTQ characters to boot. Post-Ellis, has some issues, as After Elton points out, but I’ll still be reading. 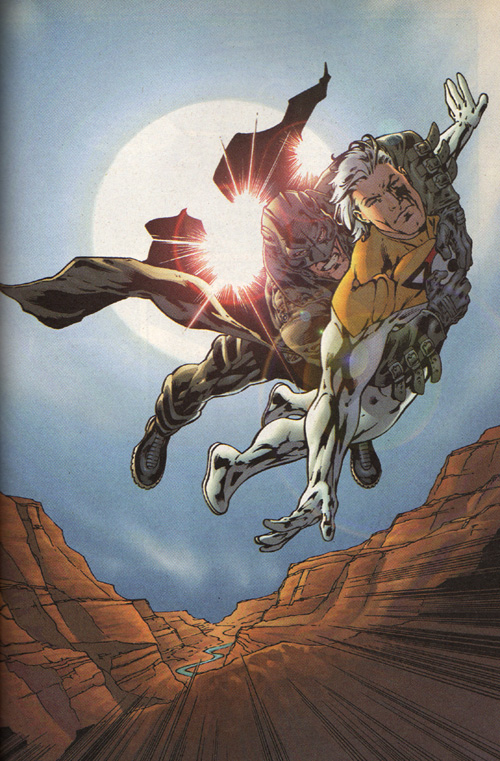 The lovely couple in the sky.