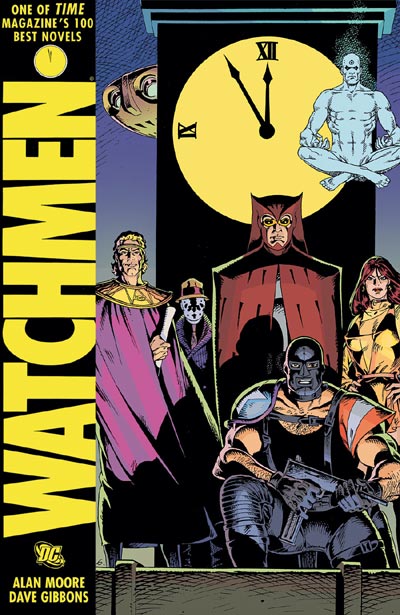 While these posts are part of a celebration of LGBT History Month, Watchmen‘s problems go beyond just sexual minorities, and I’ll also be covering gender and racial minorities in this part.

As a great story, Watchmen must be able to reach across all types of people and become a universal story. A universal story is enjoyable no matter who you are and no matter if you physically or emotionally resemble the characters. Watchmen, however, falls short from being a universal story as Alan Moore and David Gibbons normalize women, racial minorities, and sexual minorities through marginalization.

Moore notes that he wanted control over his own characters for Watchmen so he could destroy or kill them without blighting the beloved DC Universe. This is important because Moore’s making a mockery of the perfect superhero, who has no flaws, by making his heroes murder and rape victims, become alcoholics, go crazy, etc., and he gives only one of them actual superpowers. Most of them are no stronger, faster, etc. than you or I. This meta text is credited with moving superhero comics into darker realms of human experience than they’d ever been before. Moore and Gibbons craftly uses the backdrop of the Cold War and millennial panic to show how everyone, regardless of superpowers, gender, race, or sexual orientation, is affected by life.

For the purpose of this, I am only going to talk about characters who are given names, not those who are in the backgrounds. I’m going to put Sally Jupiter, Ursula Zandt, and Laurence Schexnayder in the racial/ethnic minorities because the text points them out as such. I am not including Laurie Juspeczyk as she firmly says no one cares anymore that her family’s Polish. And before anyone starts arguing for the rights of blue people, Doctor Manhattan is completely discounted given that he started off white and sees himself and is seen by others as superior and having even more privilege than he did before due to his superpowers.

By the end of The Watchmen everyone on this list, except Sally and Laurie (and possibly Laurence and a dying of cancer Janey), are dead, and a several of them, especially the sexual minorities, are dead before the current storyline ever begins and are only alive in flashbacks.

The Watchmen would’ve been greatly enhanced by having minority characters be more than the witnesses and victims of the plot. Moore is largely telling a story from the point of the view of the straight, white men. He’s projecting their worries, their fears of the future, and their inadequacies.

The one exception to this is Chapter 6, which is told from Dr. Malcolm Long’s perspective. Malcolm is Rorschach’s psychiatrist when Rorschach is caught, de-masked, and imprisoned. On the surface, we’re shown some of the strains Long’s dedication to his work takes on his marriage. However, Long’s point-of-view is mostly use to explain the story Walter Kovacs (Rorschach). Without a mask, Walter is completely unable of introspection and carrying on the tale. The story uses Long for his clinical eye, not for his true point of view; he is Walter’s messenger.

Similarly, in his own notes, Moore writes about how in early drafts of The Watchmen, he had no other purpose for Laurie except for her to be a catalysis for Doctor Manhattan. Laurie, who out of all those listed above, has the most narrative time, is used throughout the story as motivation for the other characters’ actions and behaviors. She gets Doctor Manhattan to return to Earth and she gets Dan Dreiberg (Nite Owl II) to put back on his costume; not because she demands they do it or has stellar arguments about why they should agreed with her, but because they both love her and can’t live without her, want to have sex with her, and/or she gives them a convenient excuse for what they want. The scenes with her mother Sally are nice, but they only serve to tell flashbacks, which give light to other characters, particularly that of Edward Blake (The Comedian).

I’m not saying that Watchmen isn’t a good text or isn’t worthy of the praise it’s gotten. Moore and Gibbons do a great job at making a meta text about the Supermen, the Batmen, and the Captain Americas. However, as we move away as a society from teaching and learning just texts by old dead white men, The Watchmen may have been written too late and on the cusp of change to resonate as a classic text among those who might not otherwise pick up a comic book. After Moore and Gibbons die and their audience ages, younger audiences might come at this text with a harder critique than I have because at the end of the day, the minorities in this comic still wind up dead and do not carrying the narrative. Watchmen will likely be praised only as a catalysis for darker and more adult comics being printed by mainstream comic publishers.

To be fair, every character in Watchmen suffers and many of them die. However, this doesn’t make up for the fact that the minorities all die. This does not make up for the fact that all of them only serve as motivation to move the plot further along. They are not the makers of narrative; they are only the vehicles or, in many cases, the messengers. They are secondary, so much so that Wikipedia helped me when I couldn’t remember their names. Their deaths are what Moore uses to show that they’ve “normalized” into society; but it only serves to further marginalize them.

*Rorschach is also implied to be gay as is Ozymandias; however, the first lacks any psychosexual development and the latter may be asexual. This will be covered in Part 3 of 3.