In the introduction for Gotham Central: Half a Life trade paperback, author Greg Rucka writes, “Ordinary people have secret identities, too.”

This is not to say that coming out, especially the first time(s) and to authority figures, isn’t a big thing. In fact, being out is a privilege that not all queer people have. However, in literature, this type of story becomes cliche or a safe tale to tell about the gay experience.

Then came along Renee Montoya and her coming out story in Greg Rucka and Michael Lark’s Gotham Central: Half a Life. It rocked my socks. 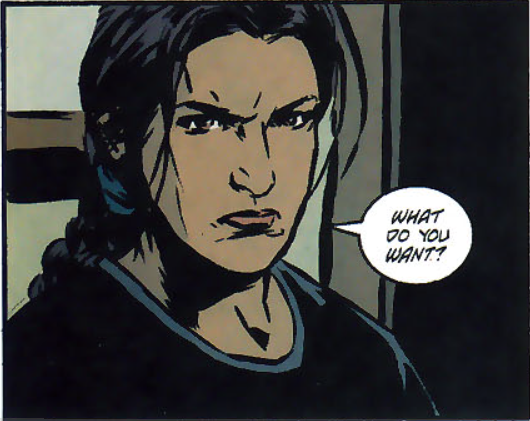 When we meet Renee, she’s part of Gotham City’s police force in Batman: The Animated Series; soon after, she was brought into the comic books and promoted to a detective role on the force. She’s a hard-lined, but at her core, good detective with ties to the Hispanic community through her family and her heritage.

During DC’s No Man’s Land, Renee makes an unlikely alliance with Two-Face. Together and with the help of Renee’s brother, they save civilians trapped after a major earthquake hits Gotham City. Specifically they help those in Renee and her family’s neighborhood where emergency services won’t go. Two-Face develops an affection for Renee, who can reach his Harvey persona. 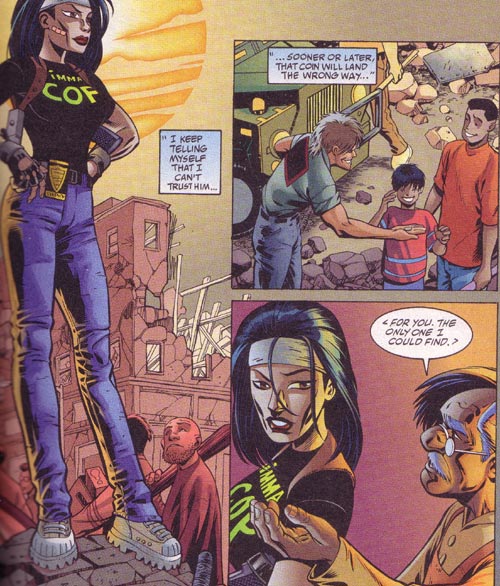 Renee contemplates Two-Face’s stability, and her father gives her a bullet for her empty gun, just in case.

In Half a Life, rapist and otherwise violent criminal Marty Lipari is let go from custody. Renee was one of the officers who was on his case and Marty stabbed her. And, in another view of the corruption of Gotham, Marty sues Renee. Marty also sends a PI to investigate her: probably hoping to find typical Gotham police corruption. However, Renee’s a good cop and a good person.

What the PI does find is Renee’s hidden life; that she’s a lesbian and she’s not out to her parents, her community in general, or her co-workers.

Photos of Renee kissing her girlfriend, Daria Hernandez, are posted on the bulletin board at Renee’s work and sent to her parents. Everyone immediately knows.

The PI’s photo of Renee and Daria kissing.

One of the shining moments in this story is when Captain Maggie Sawyer, Renee’s boss, pulls Renee into her office after her outing. Maggie herself is an out lesbian, and she tries to express solidarity and empathy to Renee. However, as Renee points out, Maggie has white privilege where as Renee does not. 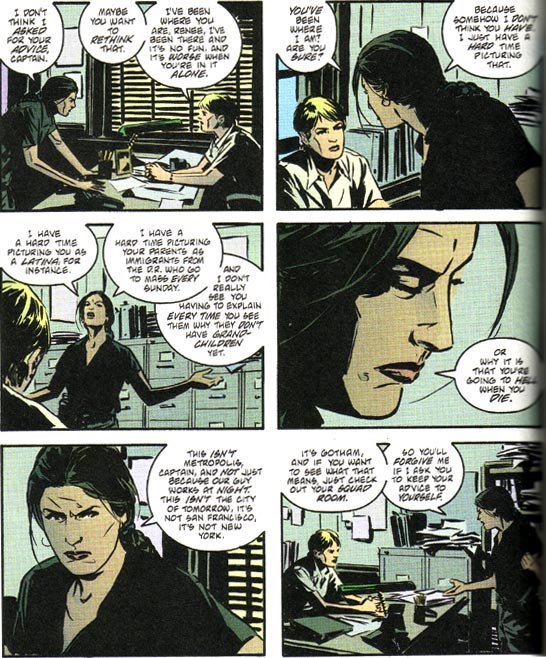 Renee tells Maggie exactly what their differences are.

As the story goes on, Marty and the PI are murdered, and Renee’s framed for the murders. Renee and Detective Crispus Allen (her partner) both figure Two-Face is behind the frame-job, especially after Renee is kidnapped while on her way to prison.

During her captivity, Renee finally realizes just how messed up Two-Face really is. He’s fallen in love with Renee, and he expects her to be with him. Two-Face sees Renee’s being closeted, not as him never having a chance, but as her living the same type of double-life as he does. With Batman’s help, Renee’s rescued and Two-Face goes back to Arkham Asylum.

At the end of the story, Renee attempts to make peace with her family and come clean with them. They disown her, and the story ends with Renee crying on Daria’s shoulder.

When Gotham Central ended at #40, Renee had left the force, broke up with Daria, and sunk her sorrows in a bottle. However, this wasn’t the last of Renee. She became one of the stars of DC’s 52, a weekly about the missing year after Infinite Crisis. She becomes the partner and trainee of PI Vic Sage, aka the Question. Renee’s story is, on the surface about hunting down an Intergang plot and saving her on-and-off again girlfriend Kate Kane (Batwoman) from being the sacrificial lamb of the Religion of Crime. However, the story is about Renee putting her life together and Vic passing the Question’s mantel to her. It’s about her realizing her life’s passion to help others in way she couldn’t as part of the GCPD. 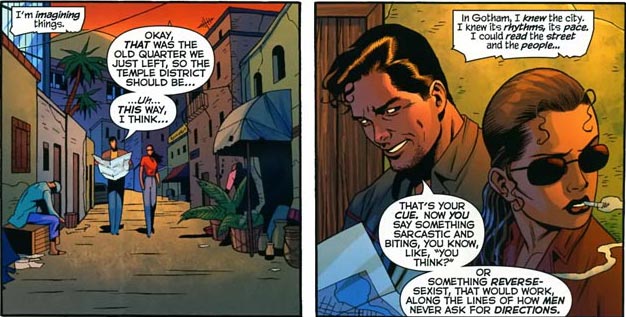 Renee and Vic investigate in Shiruta.

Post-52, Renee stars in two mini-series Crime Bible: Five Lessons of Blood and Final Crisis: Revelations, which are about the Religion of Crime and how Renee tries to dismantle them. Oh, yeah, there’s also that whole anti-life equation, giant DC crossover.

Currently, Renee stars in the second feature in Detective Comics and is hunting down a missing girl. She seems to fully be the Question, donning the face distorting mask, yellow gloves, and the traditional blue suit and hat, but we haven’t seen much of her personal life lately.

Renee is the Question.

Renee is hands down my favorite character in the DCU, and I’ll keep reading the books she’s in.