Both Rorschach (Walter Kovacs) and Adrian Veidt (Ozymandias) are also possible LGBT characters. However, the text does not directly identity either them as gay; it only gives undertones and innuendos. This could be Moore and Gibbons’ way of saying that neither Rorschach nor Adrian are self-aware enough concerning to their sexuality to self-identify and/or act on any urge, and both are essentially asexual. This could also mean that neither of them are gay as Moore and Gibbons had no problem identifying Ursula Zandt (Silhouette), The Hooded Justice, and Nelson Gardner (Captain Metropolis) as LGBT; and the latter two were very closeted, though couldn’t keep their relationship with each other a secret from their team members. 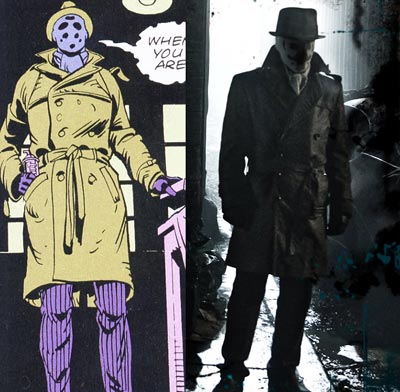 As probably the most popular Watchmen character, Rorschach is an anti-hero with a black and white sense of right and wrong. He serves as narrator for a lot of the comic. He is extremely socially conservative, homophobic, and misogynist. Rorschach also completely lacks any psychosexual development and in general, is psychologically immature. His inability to self-express is worsened when he’s forced to take off his mask (in Chapter 6) and Moore passes along the narration to his psychiatrist, Dr. Malcolm Long. While Rorschach’s the most naive and child-like of all the characters, it’s also literally his way or the highway; if you cross into the black hat wearing zone, he (as a white hat) will kill you and often brutally. This is no doubt part of his appeal to us readers.

Rorschach’s sexuality largely centers around witnessing his mother’s prostitution at an early age. This was deeply traumatic for him, so much so that he freely calls any woman he meets a slut or a whore. Even Laurie Juspeczyk (Silk Spectre II) who fights on his side and helps rescue him from jail still gets called a whore. There is no way Rorschach could make friends with a woman, much less engage in any sort of sexual or romantic relationship with her. And since he lives and dies by his strict morals, he is also not going to hire a prostitute (of any gender), which would no doubt just remind him of his mother.

One of the biggest undertones that Rorschach’s gay is his friendship with Dan Dreiberg (Nite Owl II). Dan’s perhaps the only person in the book who genuinely likes Rorschach and is the one who suggests he and Laurie break Rorschach out of jail. Everyone else dismisses Rorschach as crazy, a jerk, or pity him. Rorschach trusts Dan in a way that he does not with the others and follows his lead. There’s a bit where the two of them are investigating Adrian and both Moore and Gibbons draw from the buddy-cop genre: a genre full of homoerotic innuendo. This is perhaps the only moment in the comic where Rorschach almost seems happy, determined to find the bad guy, but happy all the same.

This all said, there is no conclusive evidence to know where Rorschach fits on the Kinsey scale. In the comic, he is only portrayed as either asexual or most like anti-sexual, in how morally reprehensible he finds any notion of sexuality. 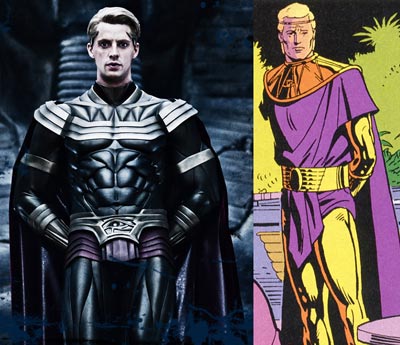 Adrian Veidt (Ozymandias) is interesting in how his sexuality is portrayed in the comic book compared to the movie. In both, he’s given roughly the same background: wants to fix the world, neglected by his parents, largely raised by the television, brilliant, and head of a vast commercial empire. He’s one of the only characters who’s secret identity is publicly known. So much so that he sells action figures of himself. He’s also obsessed with ancient emperors, especially Ramesses II and Alexander the Great.

In the comic book, I argue that his sexuality is underdeveloped due to his personal skills being put on hold for his brains and his love of TV isolating him from human interactions. He appears largely asexual. Except for his love of Alexander the Great and how he wants to be him. Adrian uses Alexander the Great as his role model in his business dealings. Perhaps this also extends to Adrian’s personal life, and Alexander the Great was either bisexual or gay. Interestingly enough, Rorschach pegs Adrian as possibly gay when investigating him.

In the movie, I argue that Adrian is portrayed as either bisexual or gay. While consistent with the comic, Adrian has no romantic or sexual relationships on screen, there are other hints that Adrian likes men. In the opening montage, Adrian is seen hanging out with the Village People, Mick Jagger, and David Bowie at Studio 54 in the 1970s; a time when all these men were synonymous with gay male culture. In another opening scene, he’s seen with Andy Warhol and Truman Capote, who were also both gay. Though perhaps the biggest tell is when Dan looks through Adrian’s computer and finds a folder labeled “Boys,” along with his evil plans, of course. I’ll just hope those boys are all over 18 because we don’t need that stereotype.

Similarly to Rorschach, I don’t think Adrian has a defined sexuality in the comic book. However, when it comes to the movie, it seems that Director Zack Snyder agreed with Rorschach’s assessment of Adrian’s sexuality.

If neither Rorschach nor Adrian are gay, it’s rather sad that Moore and Gibbons chose only to include straight (or asexual) characters in the Crimebusters, unlike the Minutemen. But if they both are gay, Rorschach just adds to the LGBT body count and Adrian plays into the gay turned evil stereotype as well.