Alan Moore and Dave Gibbons’ Watchmen is without a doubt one of the most celebrated comics ever created. Published in 1986-87, they took archetypes of classic Charlton Comics’ characters, gave them flaws, and put them in a dystopian alternative universe where the United States won the Vietnam War; Nixon’s still president for several terms; nuclear war with the U.S.S.R. seems imminent.

While Watchmen mostly focuses on the second superhero team, the Crimebusters, it features flashbacks to their predecessors, the Minutemen. The Minutemen had three notable LGBT characters: Ursula Zandt (Silhouette), The Hooded Justice, and Nelson Gardner (Captain Metropolis). Sadly, all three have been murdered before the story ever begins. This is problematic given the history of LGBT characters being killed off, and I will go further into this in Part 2 of 3. 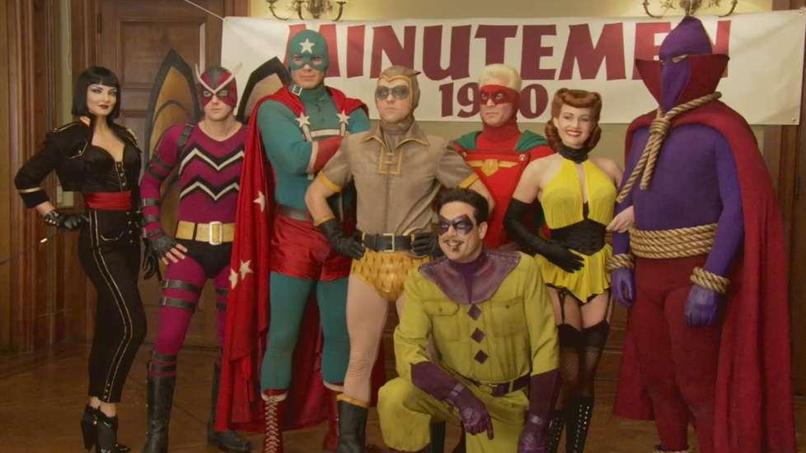 Ursula’s a Jew who fled from Austria during the Nazi invasion. She took up crime fighting for an unknown reason and joined the Minutemen. She received notoriety after taking down a publisher who was trafficking child pornography.

While Ursula never revealed her real name to her teammates, she was open about her ethnicity and her sexual identity as a lesbian was well-known, especially for someone in the 1940s. The Minutemen kicked her out the group due to her sexuality, which she believed was unfair given she wasn’t the only gay person on the team.

Ursula and her girlfriend were murdered on November 12, 1954 by the Liquidator, a minor villain. Overall, Ursula is one of the least developed Minutemen and in very few of Gibbons’ drawings. Arguably, the movie gives us more insight into her character, including a scene where she kissed her nurse girlfriend in an obvious spoof of the famous sailor/nurse kiss photograph from V-J Day. The movie also plays up her death as a hate crime. 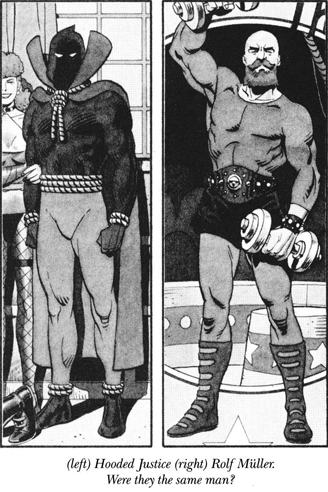 The Hooded Justice was the only Minutemen whose real life identity was never revealed to either his teammates or to Congress. However, many characters speculated that the Hooded Justice was actually Rolf Müller, an East German circus strongman. His reasons for not revealing his identity to Congress might’ve had to do with the McCarthy trials. It also could’ve been that Rolf was rumored to be a Nazi sympathizer.

During his time on the Minutemen, the Hooded Justice “dated” Sally Jupiter (Silk Spectre). Their teammates believed their relationship to be purely fictional, only the press and a young Laurie, who thought the Hooded Justice to be her father, bought the relationship. Sally’s manager and later husband, Laurence Schexnayder was the most vocal about Sally being the Hooded Justice’s beard. In a letter to Sally, Laurence describes a lovers’ quarrel between H.J. and “Nelly” (believed to be Captain Metropolis) who he likened to an old married couple. In addition to being gay, the Hooded Justice’s costume — with its noose and ropes on his wrists and ankles — suggests that he was into bdsm. 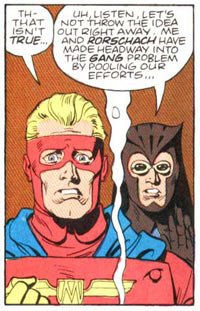 Based on both Superman and Captain America, Nelson Gardner was a Marine who became a superhero. In the Fall of 1940, he founded the Minutemen. While he was their leader and a solider, he was also portrayed as timid and easily flustered by his teammates and Laurence. He had a secret relationship with the Hooded Justice.

After disbanding the Minutemen in 1949, he later went on to found the Crimebusters in 1966. However, his attempts were futile as the Comedian showed up only to mock him. Another example of Nelson’s weak-willed personality.

Nelson was later shamed for making racist statements. He died by decapitation in a car wreck in 1974.

The Fate of Hooded Justice and Captain Metropolis 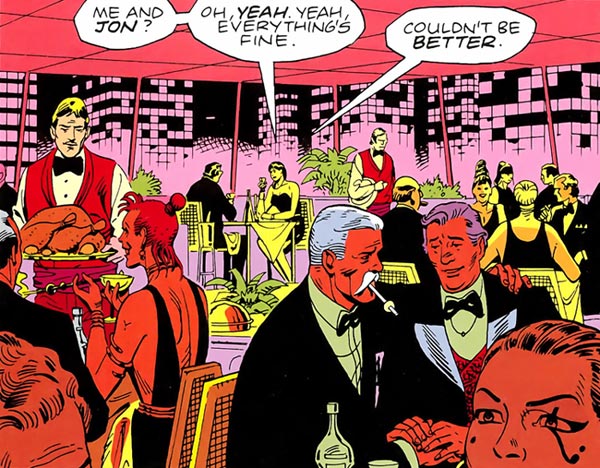 Gifford’s reasons include that the men are the right age to be them. Also both the men’s ties are in the shapes of a superhero’s mask. Additionally, the man theorized to be the Hooded Justice has a bolo tie resembling the noose on the Hooded Justice’s costume.

On a happy note, this would mean that two of the gay Minutemen had survived by the time the book starts. However, it would be very likely that they died, along with most of New York City, by the comic’s end.

Gibbons has commented that he did not draw either the Hooded Justice or Captain Metropolis, but that the gay men are supposed to further symbolize just how lonely and isolated in her own romantic relationship Laurie is when even in a conservative world run by Nixon, two gay men can happily enjoy a night out. But Gibbons did like Gifford’s theory.

In part 2 of 3 tomorrow, I’ll discuss the problems arising from the deaths of these characters and more in the Watchmen.