What’s a team of Young Avengers if one or more of them isn’t a child of the original Avengers? Okay, William “Billy” Kaplan (Wiccan) isn’t by birth, but he and his not-biological twin brother Thomas Shepherd (Speed) are the reincarnated fake magical children of Wanda Maximoff (Scarlet Witch) and Vision, who’s a robot. ^^ 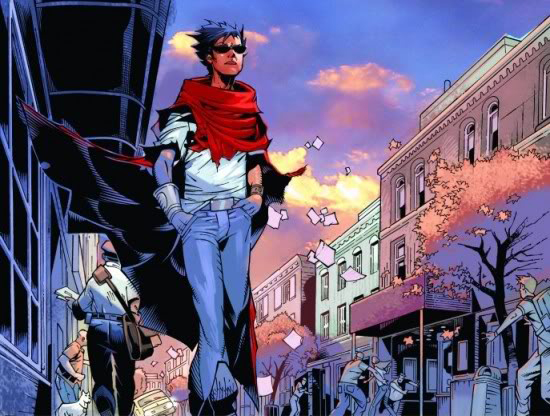 Picked on as a child, Billy gains his powers when he has a vision of the Scarlet Witch while hanging out in the old and destroyed Avengers’ Mansion. She tells him to stand up to the bullies next time. From then on, he can fly, generate lighting and a force-field, cast spells, project himself astrally, alter reality, and teleport. Billy does not know the full extend of his powers; and more recently, his powers have been aligned with the magic arts, especially when Doctor Strange approaches Billy to see if he’s the new Sorcerer Supreme. (Sadly, the title went to Brother Voodoo.) 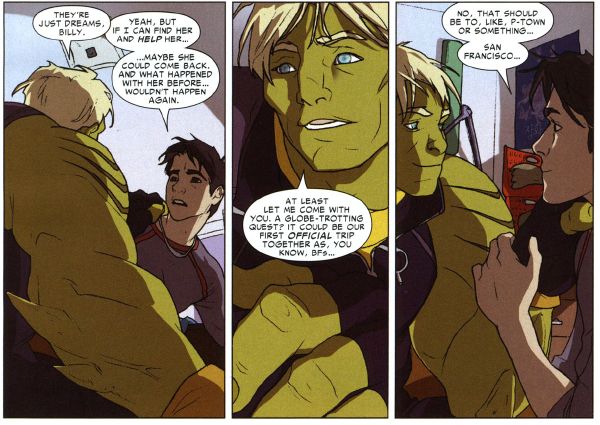 Hulkling and Wiccan discuss their relationship.

Very quickly in the comics, Billy’s revealed to be in a relationship with Theodore “Teddy” Altman (Hulkling). Apparently, writer Allen Heinberg (who’s openly gay himself) was surprised just how quickly people caught on that Billy and Teddy were more than just friends. So he chose to be more explicit sooner about their relationship. Billy and Teddy refer to each other as boyfriends in text, are affectionate, out to their teammates, and even gave an interview as part of the Young Avengers and came out to the media. Their parents also know and seem to be very accepting. 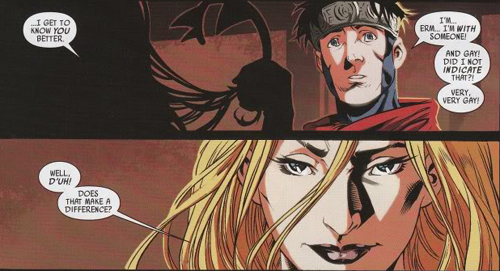 Enchantress II and Wiccan discuss her magical training and interest in him.

The rest of Billy’s personal life has been showing the bond he’s developed with Speed, his brother, and their search for the Scarlet Witch, whom they refer to as “mom.” It’s great to see a Maximoff family dynamic that is not creepy.

Overall, I hope that the Young Avengers get another book and one with a good writer. I’d love to see Heinberg pick up the title again. However, he’s probably a little busy with Grey’s Anatomy.