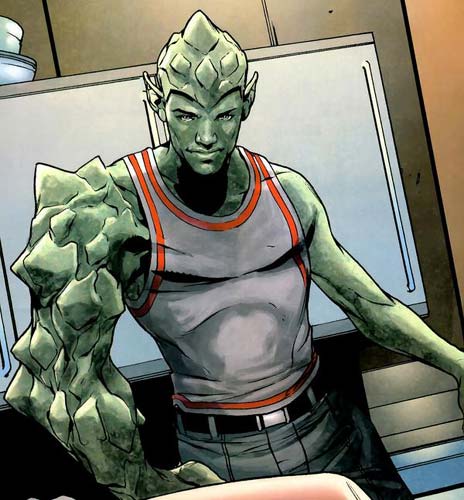 Initially a background character in the relaunch of the New Mutants, Anole’s young, openly gay, and looks like a reptile. He has superhuman speed, agility, and reflexes. His tongue’s sticky; he can crawl walls; and he can camouflage himself. Anole’s 16-years-old when he joins the Xavier Institute.

Writers Christina Weir and Nunzio DeFilippis planned on making Anole come out to his parents, be rejected by them, and kill himself. They thought this would be “a powerful message about what intolerance can do to people.” Thankfully, Marvel editors thought better.

Anole lives for another day, and he does come out to his family and small hometown, which accept him. In New X-Men, Anole takes on a bigger role and is presented as a stable, normal teenager and good student. He even becomes a role model for other out gay youth, including Jonas Graymalkin. Anole’s one of the few students who survives M-Day with his powers intact. 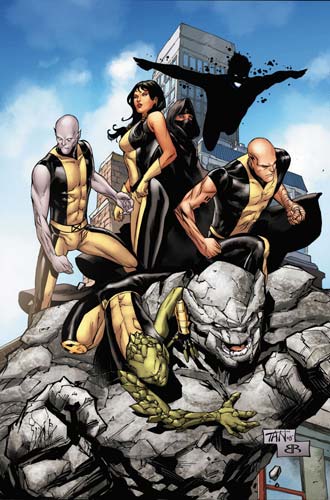 When he joins the X-Men, Anole picks Northstar specifically to be his mentor and help him come to terms with being an open gay man. However, Northstar dies, but is shortly thereafter resurrected. Anole’s ecstatic to see his mentor alive and well. But like every other plotline, Northstar’s been brainwashed and knocks out Anole.

Anole’s further disillusioned about the world’s acceptance of mutants and the Xavier Institute in general when the Purifiers attack the school. A bus full of students, who are Anole’s friends, die.

Then the students end up in Limbo by themselves. Immediately, demons attack them, and Anole shows leadership by gathering them into a fighting formation. He ends up having one of his arms cut off in battle. However, because he’s a lizard, his arm grows back even stronger. (Beast later confirms that Anole’s body parts will always grow back stronger than before.) When Anole and the others finally escape from Limbo, he and Pixie officially become members of the New X-Men team.

Fellow students, Rockslide and X-23 dare Anole to cut off his other arm so he can have two very strong arms. When he refuses, Rockslide calls him a sissy. Feeling that Rockslide’s comment was about his sexuality, Anole lashes out and outs himself to Rockslide. Rockslide then later accidentally outs Anole to the rest of the students, who inform Anole that they already knew.

However, Anole’s time on the team is short-lived as Cyclops closes the school and Anole goes home to his family. When Cyclops reforms the X-Men and moves them to San Francisco, Northstar comes looking for Anole. They have a confrontation in Anole’s tree house. Northstar believes that Anole’s still having a hard time with being a mutant and gay; however, Anole’s actually mad at the X-Men for stealing the innocence of the students. Anole elbows Northstar in the face.

Anole in his tree house

Dani Moonstar finally convinces Anole to rejoin the X-Men. And he almost leaves once again when his teammate Dust dies. Before Dust’s resurrected and convinces him to stay, again.

In many ways, Anole is the voice of reason for the young people. He may end up rather like Cyclops, standing up to his elders to make a better way for the newer generation of mutants. And I really think this would be a great role for him.