I kicked off the month with Midnighter, so it seems fitting to end it with Midnighter’s husband Apollo. This also makes Apollo the fourth queer character from the Authority to grace my blog for LGBT History Month.

Apollo and Midnighter are presented as opposites of one another and opposites attract. Apollo wears white and is modeled after Superman compared to Midnighter’s black and Batman-like attitude. Apollo’s generally more jovial and light-hearted. He’s also solar powered; and his powers increase with more sunlight (even directly from being inside the sun), and without sunlight, he starts to power down. 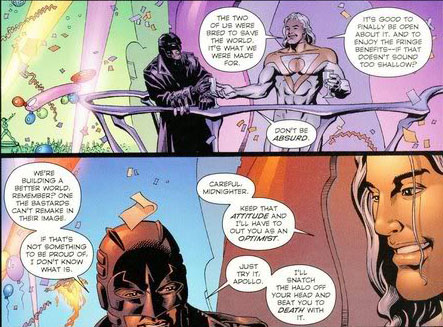 Apollo and Midnighter banter about their differences in attitudes.

What’s most interesting about them is their origins are both the same. Apollo and Midnighter were created in a lab and their pasts, before that (if they weren’t grown there), were completely erased from their minds and any public records. Granted, they have vastly different superpowers, and Apollo’s is more superpower designed to be a superpower and Midnighter’s superpowers are designed to kill people and have an off-switch. 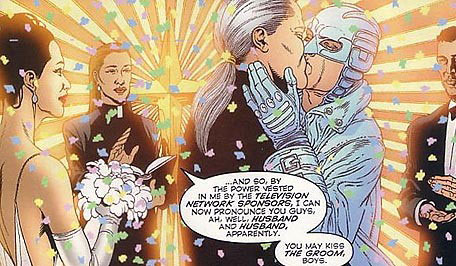 Apollo and Midnighter get married.

Unfortunately for Apollo, he hasn’t gotten the most character development recently. Because Midnighter’s the fan favorite (and admittedly, my favorite too), Apollo tends to get two uses: with his team as a really powerful being who can kick ass or as the damsel in distress who needs saving by Midnighter. I know Apollo gets weakened without sunlight, but there are just some villains in some situations that shouldn’t have been able to take him out. (I’m looking at you, Mark Millar, with your Authority plotline where it’s implied that Apollo gets raped while being held hostage.)

I was hoping in the current “World’s End” storyline to see Apollo on his own as he can’t spend a lot of time on Earth due to the sun being blocked out. However, instead, Apollo’s become the damsel again. He’s been infected with the Warhol-virus — which creates killer monsters from people before exploding them 15 minutes later, but Apollo’s sun connection has made the virus mutate and him live on — and Midnighter’s on a quest to save him.

Since Warren Ellis’ run ended, I think Ed Brubaker was the only writer to give Apollo any sort of agency away from his husband and from the team; of course, that was only because Midnighter and Apollo broke up and the team disbanded. But I really did love the father-daughter bits with Apollo and Jenny Quantum.