I was going to do an entire entry devoted to all the Lesbian Pirates of I Was Kidnapped By Lesbian Pirates From Outer Space!!!. Then I considered doing separate entries for each, but they would take up a large part of the month. So instead, I decide to focus on my favorite Lesbian Pirate:

Janet McSapphic or The Captain 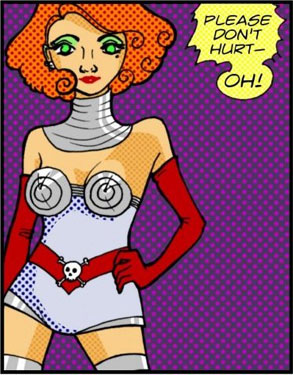 Full warning: I have only read the first arc, so please don’t spoil me for the rest. Yes, I know there are more available online. (Read I Was Kidnapped By Lesbian Pirates From Outer Space!!!) However, I want to support writer and artist Megan Rose Gedris and buy her comics in print. That and print will be good for re-reading when I’m 50+ and thinking about how awesome lesbian pirates in space are. I don’t want to relay on the Wayback Archive and my memory, especially to say “D’oh, it was deleted in the Great Google Disaster of 2032.”

Anyway, the Captain is the brave, bossy, risk-taking Captain, in charge of the search for the missing Pirate Princess. See, a long time ago on Lesbos-3, their young princess was stolen from them, and the Captain and her crew are in charge of finding the princess.

Their ship is equipped with a gaydar, which detects lesbian thoughts and leads them to other lesbians. (Wow, have I ever wished for this while dating.) In the first arc, they kidnapped Susie Bell, a secretary from Earth. Turns out Susie gives off major lesbian thoughts. 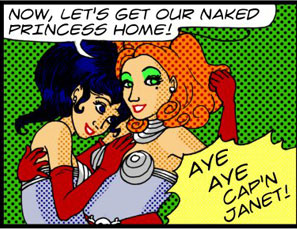 While the Captain may be single-minded and often insane, she does have the respect and loyalty of her crew. They trust her to lead them, rescue them, and plan how to fix what’s wrong. The Captain also likes peace on her ship and making sure they have money.

This is a typical Captain plan:

The Captain is just down right awesome, and really I suggest you read I Was Kidnapped By Lesbian Pirates From Outer Space!!! because it’s awesome too. The story’s written in pulp space novel style and the art is a kind of cheesecake I can appreciate. And did I mention: Lesbian. Pirates. in Space.