Jenny’s a Century Baby and born in England on January 1, 1900. Her family is wealthy, but dies on the Titanic, while she’s in boarding school in Vienna. Jenny’s taken in by her godfather, Albert Einstein. She also befriends a young painter — Adolph Hitler — and encourages him to give up his art. (And yes, writer Mark Millar has Jenny sleep with Hitler in The Secret History of Jenny Sparks.)

Jenny becomes the English government’s main point of contact with Sliding Albion, an alternate Earth where humanity encountered blue-skinned humanoid aliens during the Renaissance. Sliding Albion’s politics are still monarch-based, and Jenny ends up marrying Prince Lorenzo of Albion. Lorenzo convinces Jenny that they must over-take his tyrannical father. She later says this Scientific Romance era was her favorite. 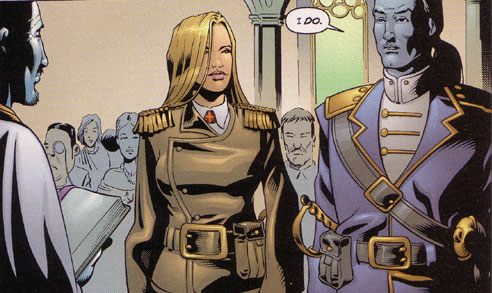 Jenny and Lorenzo getting married.

However, it turns out Lorenzo’s just playing Jenny and the British and only wants to take over his father’s rule for more power. Lorenzo quickly becomes Jenny’s ex-husband and one of her least favorite people. (Also someone she fights in battles several times throughout her life.) Due to her diplomacy with Sliding Albion, meeting the first of the superheros, and working with the military, Jenny becomes a Colonel in the British Army’s Intelligence division.

In the 1930s, Jenny moves to America where she lives her life like a pulp novel. (Jenny’s likes and dislikes are the pulse of the people and dictate trends and attitudes of the century.) She’s an adventurer and even dates a certain Indiana Jones. She also became more involved with the superheros of that decade, including The High.

During WWII, Jenny fights on the side of the Allies against the Nazis. (If one follows Jenny as zeitgeist, her alliance with Britain and the Allies could be the reason the Allies won.) In one her missions against the Nazis, Jenny recovers a giant egg; though before she takes it back to Britain, she’s captured by the Nazis. The egg’s said to contain a being that’ll bring an era of peace to Earth, and fans theorize the egg contains Jenny’s later Stormwatch/Authority teammate Swift. Hitler recognizes Jenny and has her and the egg released back to England.

Post-WWII, superheros fall out of favor. Jenny goes back to America where she becomes a noir private eye. She’s further disenchanted when her partners are crooked. She heads home to England for the 1950s. She again works for the government in all things supernatural, superhuman, and extra dimensional. Sliding Albion falls into its first world war and vents biological warfare weapons across the Bleed and into England. However, while in transit, the bacteria changes and gives some of the British it infects superpowers. 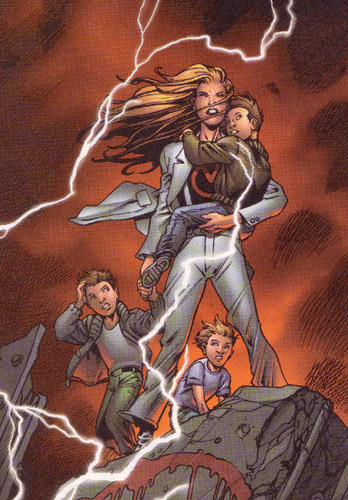 With all the new superheros, Jenny and a small group of them form Britain’s first superhero team. She feels at home on her team and that she can finally make a good impression on the world. Again, her spirit no doubt contributes to the rise of hippies and the progressive notions in the 1960s. However, Jenny’s enthusiasm’s squashed when one of her teammates overdoses on drugs and she kills another after discovering he’s a serial killer.

Jenny spends most of the 80s drunk. For a brief moment, she’s part of another superhero team. But again, Jenny finds them to be corrupt and tells them that if she ever sees them again, she’ll kill them. Stormwatch leader Henry Bendix approaches her about joining one of his teams, but is rebuffed.

However, Bendix doesn’t give up and eventually convinces Jenny to trade in her spot at the bar for leadership of his black ops team. As part of Stormwatch Black, Jenny works with Swift and Jack Hawksmoor. The trio investigates the worst superhuman crimes, specifically in urban areas. It’s also unwritten that if need be, they do kill people.

In “Change of Die,” one investigation leads Jenny to discover Bendix’s own corruption. Bendix wants to kill The High and the other WWII/1950s superheros he’s cryogenically frozen. Bendix’s slowly controlling all the world’s superheros at part of Stormwatch, and The High wants none of this. Bendix’s also revealed to be doing lots of genetics experiments with superhuman powers. Jenny tracks down Bendix and kills him. (Which she actually has to do again, when he shows up alive in another plot.)

Jenny then creates the Authority. She somehow commandeers their living ship, The Carrier, which exists in the Bleed. This means, the Authority can access anywhere in the world and in other neighboring alternative universes if they need to. Jenny leads her team with the attitude that they’re doing right, no matter if the rest of the world politically agrees or not. At some point, Jenny has a relationship with her teammate Swift. 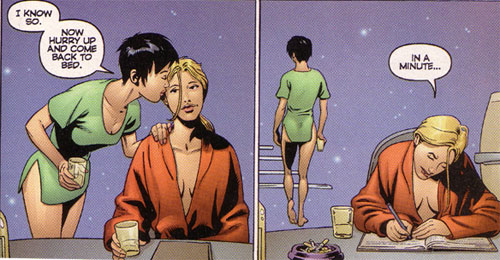 Being the Spirit of the Century means that on December 31, 1999, Jenny dies and a new Jenny, Jenny Quantum, is born. Jenny Sparks’ final gift to humanity is her life; she dies while electrocuting a creature called “God,” which claims to have created Earth and now wants to wipe it clean. Her last words are, “Save the world. They deserve it. Be better. Or I’ll come back and kick your heads in.” 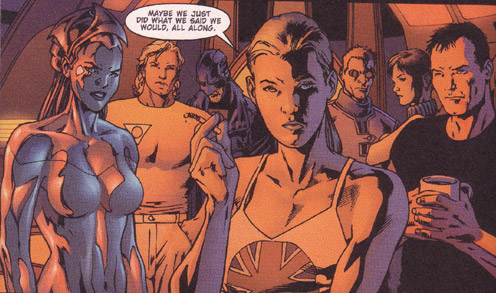 Jenny with the rest of the Authority

Jenny Sparks does appear in flashbacks and in the Infinite City. Jenny Quantum creates the Infinite City as a place where all the Jennys of every century exist together so Quantum can access all their experiences.