When first introduced, Maggie’s just moved from Star City to Metropolis and transferred police forces after divorcing Captain Jim Sawyer because she realized she’s a lesbian. Maggie explains to Superman that it took her a long time to realize and accept her sexual orientation due being Catholic. Jim and Maggie also have a daughter, Jamie, who Jim has full custody of. Again, she tells Superman that Jim freaked out about her sexuality and both he and their divorce judge felt her lesbianism made her an unqualified parent. (Later, she’s more involved in her daughter’s life and Jim’s more relaxed.) 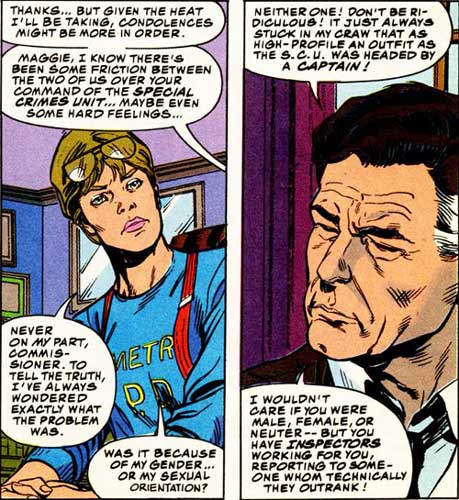 Maggie confronts her boss in one of the first time she mentions her sexuality.

Maggie moves up the ranks quickly in Metropolis. At first, she’s not sold on Superman’s vigilantism; however, after saving him from a terrorist plot, her attitude changes. Maggie becomes Superman’s number one contact on the police force and becomes close friends with Lois Lane. Maggie also starts dating Toby Raines, a reporter for the Metropolis Star. 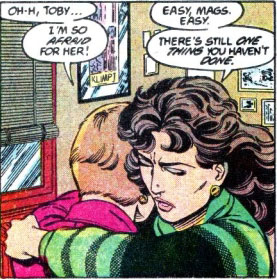 At one point, her Metropolis PD partner Dan Turpin, who’s very fond of her, purposes to her. This makes for an awkward situation, especially after he’s met Toby and hears Maggie call her, “Babe.” After Maggie spells everything out to him (off-panel), Dan tries to resign in embarrassment. Maggie tells him to forget about it and get back to work. 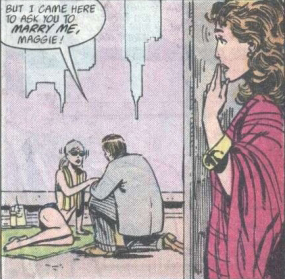 In Gotham Central, Maggie becomes Captain of the Major Crimes Unit in Gotham City, replacing Lt. Harvey Bullock who’s resigned over a corruption scandal and generally being a dirty cop. Maggie oversees all the detectives, including Renee Montoya and Crispus Allen. At this point, Maggie has a long distance relationship with Toby who hasn’t quite moved to Gotham City.

Maggie clearly has some fondness for Renee Montoya. She attempts to reach out to Renee when Renee’s outed; however, Maggie’s rebuffed by Renee. (Discussed more in Renee’s entry.) Maggie also keep track of Renee after she leaves the force and plunges into an alcoholic depression. In 52, Maggie yells at Renee who ruins the cover of an officer when Renee takes on Intergang.

Maggie’s most recent appearance was in Detective Comics where she attends a Gotham City charity event. She runs into Kate Kane (Batwoman) and the two women share an intimate dance together. That is before Kate’s called away on Bat-business. Maggie also reveals that she and Toby are no longer a couple. 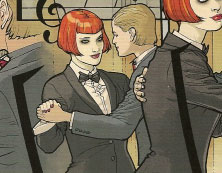 As Greg Rucka never disappoints in continuity, I’m sure Maggie will make another move.