During the beginning of Alpha Flight, Northstar’s sexuality’s only hinted at. Mostly in that he doesn’t date women and he’s more interested in skiing than snow bunnies. Northstar later must give up his passion for the slopes as he becomes disqualified from being an athlete due to his superpowers, which include super speed, flying, invulnerability, and the ability to throw light.

Interestingly enough, Northstar is the third gay male character to be featured here that has a twin. Unlike Obsidian, Northstar isn’t the one strapped with mental problems, but his twin sister Jeanne-Marie Beaubier (Aurora) suffers from multiple personalities. I’m not quite sure what the writers were saying by giving gay characters twins who are straight. A lot of Northstar’s early development focuses on his devotion to Jeanne-Marie and taking care of her. 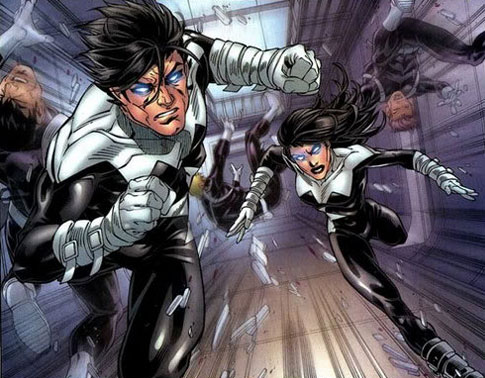 In Alpha Flight #50 in 1987, before he comes out, Northstar’s continuity features him getting an AIDS-like disease, but then it’s revealed that he’s part fairy. Yes, a “fairy.” His fairy-half not only prevents him from succumbing to the disease, but also is seen as the reason for his powers. Not to mention his very pointy ears. Rumor has it writer Bill Mantlo wanted to kill Northstar with AIDS, but the Marvel editors knew better. Later, the whole fairy thing was retconned, while Northstar still remains gay.

Northstar comes out of the closet in 1992, and the Alpha Flight issue sold out within one week. (Take that editors who say only straight people buy comics.) This was almost 3 years after the Comics Code Authority said it was okay to feature LGBT characters in comics, and Northstar was the first Marvel character to come out.

Sadly, Northstar (in Earth-616 regular continuity) has never had a boyfriend. He’s flirted with Bobby Drake (Iceman) and for a while, readers hoped they’d hook up. Instead, Northstar’s continuity regarding his sexuality features him fighting homophobia, being a gay and AIDS activist, and being a role model for young gay X-Men.

During one battle, Northstar finds an abandoned baby girl in an alleyway. Turns out the baby has AIDS. Northstar adopts her and names her Joanne Beaubier. She later dies, which causes Northstar to write his book Born Normal and become an AIDS activist. He uses his celebrity to fight against homophobia as well.

Northstar stops a villain on the ski slopes.

Northstar also confronts homophobia in his real life. In one story arch, it’s revealed that one of Jeanne-Marie’s personalities is homophobic. He also fights with fellow X-Men Omerta and Juggernaut, who are both homophobic. Eventually, Northstar comes to a truce with both men.

More recently, Northstar’s appeared in both Secret Invasion and Uncanny X-Men. He fights with his sister to destroy the Skrulls during their invasion. And he joins the X-Men after they move to San Fransisco. He only agrees to rejoin the team after Cyclops assures Northstar he’s not the token gay X-Man. Northstar later gets into trouble when he and Allison Blaire (Dazzler) take the underage Megan Gwynn (Pixie) out drinking.

Hopefully, one day, the writers will give Northstar a boyfriend. It’s just a little overdue.