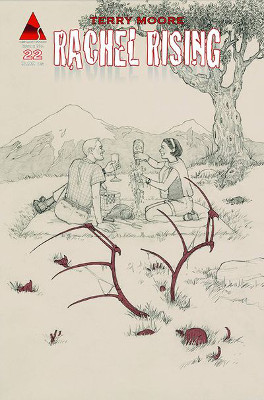 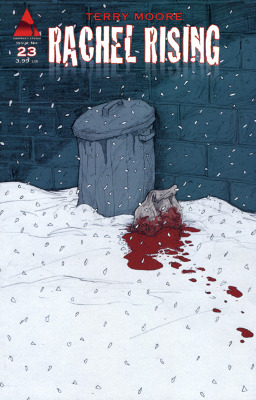 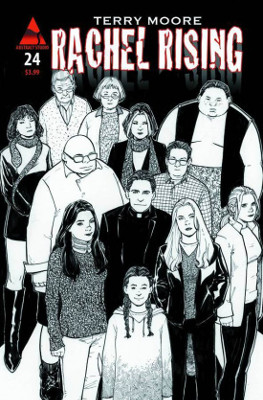 I’m not a huge fan of the bring Johnny back to life plot. That said, this was a freaking fantastically well-done issue, and it’s exactly why I keep picking up Moore’s books.

I did not see it coming that Bryn was only 9 years old when she died. Totally bought that she was much older. Sad to see that she didn’t have much of a life. But her super young age when she died could explain why she didn’t remember everything about her experiences with Lilith and also why perhaps she wasn’t as moved to help Lilith with her revenge as the others.

The bathroom scene was a little overboard, but it worked. I loved Rachel being protective over Jet’s body and laying it out there. (This is what I wanted to see in Fearless Defenders when Val and Annabelle started sharing a body.)

I was happy to see that Bryn was only beaten by her father, not raped, like I’d originally thought. Not that beating is good; it’s just less gross. Though I’m pretty sure beating your children was not exactly uncommon in those days. So I’m glad that Moore showed Bryn developing powers that attracted Lilith to her, not the Lilith was just looking for impressionable young girls. (Though I’m sure that helped.)

That is some crazy snow. I expect an explanation that probably has to do with stopping Zoe from leaving town.

Yeah, I knew that snow storm wasn’t going to let Zoe leave town. So much for Zoe being able to take control of her own destiny. Thankfully, it was Jet and Rachel that stopped her in her tracks. I love when Zoe starts yelling that she’s being carjacked by zombies. Hilarious. And I like that someone’s making labels about what’s going on, and it’s perhaps one of the most supernatural beings out of everyone.

I’m curious as to whether or not they’ll really be able to revive Johnny. They also aren’t thinking of the long-term consequences. Especially given that Jet and Rachel haven’t had it so easy over the centuries.

I know Moore’s said that sales for this title are on the rocks, and it definitely feels like the story’s coming to a head. I just hope that he’s able to end it in a way that’s complete.

Zoe stabbing Lilith with Jack, aka Satan’s knife, is perhaps very convenient to the plot. But they still look to be in zombieland — both Jet and Rachel still alive — and Malus is still active. Perhaps next Zoe will stab him?

I appreciated Mary Scott changing her mind at the last moment because of James/Jet being her brother and being hurt. It’s still odd the Rachel’s the only one with both set of memories, but I guess that’s what the main character gets.

I do wish this snowy scene had been done in color.

I’m looking forward to seeing how the rest of this plot wraps up. I’m pleased that it looks like Moore’s going to get to write more books in this world.

Discover what happens for yourself and buy Rachel Rising Vol 4: Winter Graves