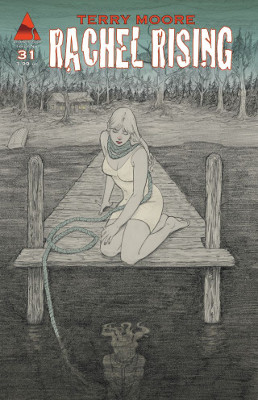 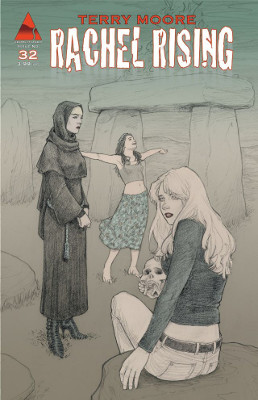 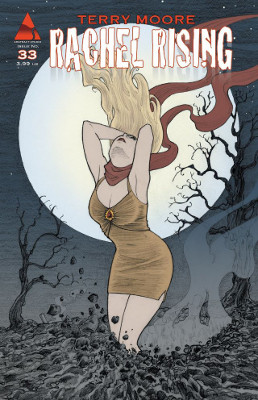 Zoe seemed to be acting a lot more her actual age here. Interesting to see what her growing up with Rachel out of the picture would be like. Her and Johnny’s relationship is definitely different in that Johnny doesn’t treat her like a kid, which Rachel really does.

This mystery is certainly a slow cooker. I hope that another dead body means that there’s going to be some traction on who this serial killer is. Johnny in investigation mode is the best.

Zoe finally spilling about Rachel’s future seeing powers was great. Perhaps Rachel’s finally far enough along on her journey of being undead and being entangled with magic that she’ll believe her. 15-year-old Zoe pregnant with the Anti-Christ was super freaky. And gross. Though Zoe had nice hair. (Moore’s characters always have nice hair.)

Jet was conspicuously missing from this issue. Especially since it had been several weeks since Rachel reenacted her murder.

I can’t help but wonder where we will go from here. It seems to me that Moore’s painted himself into a corner. If the spirit of Malus can infect anyone, then how you can destroy it. Seems as impossible as destroying “sin” or another all-encompassing idea.

Nice to see Rachel exploring her powers. I’m sure they’ll be coming in handy. Not that Rachel wants to relive everyone’s deaths.

I like the moments between Zoe and Johnny when they go from mentor-mentee to child-adult.

And we have Lilith back in town. Who may be here to clean things up or to continue the destruction. I’m not sure how I feel about Moore’s slow and steady storytelling here. Perhaps I really need to start picking up his work in trade instead of in single issue. I feel like I’ve enjoyed his other stuff more compared to Rachel Rising.

Of course, we’ve found that usually the resurrected magic types have their own agendas that aren’t great for anyone. Lilith has nothing but her own agenda.