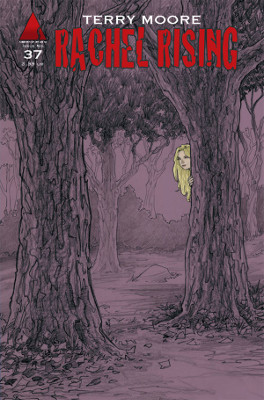 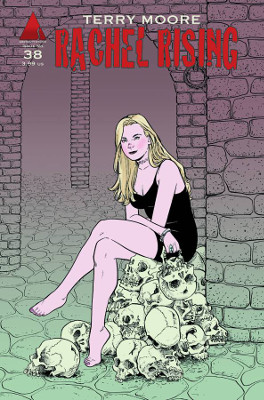 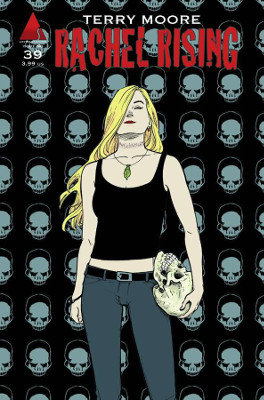 While I’ve been waiting for Moore to actually move this plot forward, I enjoyed this issue as a particular contemplative one. Rachel’s choice to say yes to Lilith and help her stop the end of the world does certainly need a few steps. Loved seeing Rachel put together her witchery box.

I’m pretty sure what we see Lilith doing — cleaning house — compared to Rachel’s words, it makes me think that I know what Lilith wants. Lilith has declared this world her place. She doesn’t actually want to go to heaven or hell. She has earth. And the reason she’s going to stop the end of the world is because she considers the world hers and isn’t going to let someone take away her home.

Moore’s art with the smoke of the burning possessions and Lilith’s face telling the neighbor to go away was particularly great. The way Lilith’s face changed with her emotions was great.

I am, however, looking forward to getting some plot and action. If we’re sending Malus to space, will we be contacting the crew from Echo?

Lillian uncovering that Lilith is much older and well-aged than she pretends to be was pretty great. Interesting to see that the older man in Lillian’s memories was one of Lilith’s loves. There’s some empathizing for Lilith as a person which we haven’t really seen before.

After all this time, Aunt Johnny comes up with a lead on who initially killed Rachel. I have a feeling this reveal isn’t going to be pretty. I also can’t help but wonder if this killer targeted young women looking for Rachel and maybe Lilith too.

Oh, Jet and Earl… What’s up with the woman on the corner staring at Earl? His face changed a lot when he saw her.

This was a great view into more about Rachel’s powers. Love that they are finally testing how and why she sees people’s death. And that Malus knows she’s doing it. So creepy.

Of course, if Rachel talked to Lilith about it, Lilith probably already knew of the connection. I have a feeling we’re going to find out something extra icky about how Rachel’s powers work.

The exchange between Earl and Johnny about Jet wasn’t just about Jet. It was also about Rachel and how Johnny doesn’t trust her 100%. There are still a zillion unanswered questions in this book, and while I don’t expect every part of the mystery to be revealed, at almost 40 issues the pile of questions only seems to be growing instead of resolving some and planting new ones.

Nice to see Johnny and Rachel interacting more as aunt and niece. Same with Earl’s humanity and his inability to deal with the sometimes horror of his actual job.