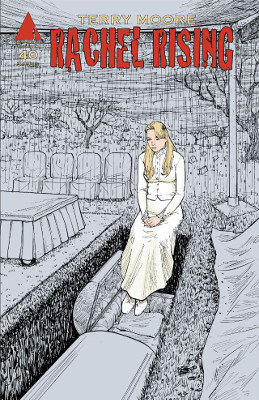 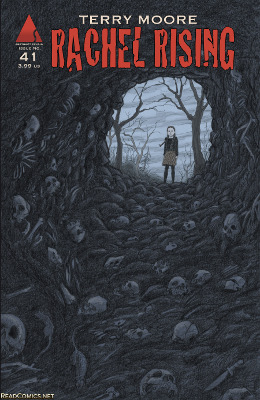 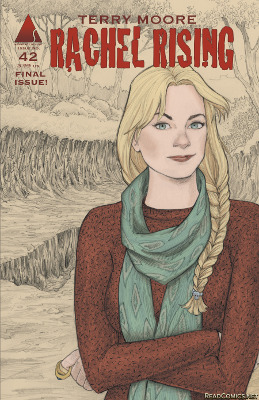 It’s hard to say how much Rachel remembers about everything in her previous lives. Or how much she recalls about Lilith. It seems odd that Moore hasn’t devoted at least one issue to the memories, especially because we did have the earlier story about Jet and Rachel.

Zoe’s having an experience beyond some sexual awakening. Though it very much could represent how she sees her own sexuality: as a ticking death timebomb. Zoe’s budding sexuality is 100% tied to the threat of being pregnant with Malus’ child, the Anti-Christ. Not to mention that knife, that knife always turns everything dark. And Zoe is the deer up for slaughter.

This is starting to feel extra anticlimactic as this book comes to an end. The penultimate issue feels more like a series that was cancelled without a plan, and Moore has to wrap it the heck up.

There’s just too much mythology. Too much of a badie, Malus, that we’ve built up as unstoppable.

Sure Rachel has broken the tradition with Lilith. She has chosen to help her sister instead of let her town and loved ones in town die. To let Rachel’s loved ones suffer. Though who knows what will happen once Malus is gone or once Lilith moves on. They could all die. Not to mention how wrecked the entire town already is.

Zoe’s fate seems extra unclear. Or at least why she’s there, except as a prize for Lilith to keep from Malus. Or Jet and Johnny and Earl. Or even Rachel’s part in this entire thing, if the final battle is between Lilith and Malus.

Wait? The last issue was the final death of Malus. Well, if that wasn’t extremely anticlimactic, I don’t know what else the word ‘anticlimactic’ is for.

I kind of actually liked it that Rachel died at the end. I mean, shitty to be the guy who killed her the first time (this life around) who did it, but at least there was closer. And it was a lovely self-realization moment and Moore’s art was great.

However, where the heck was Jet and Aunt Johnny and Earl?

Of course, there are still demons out there for Rachel and Lilith to kill.