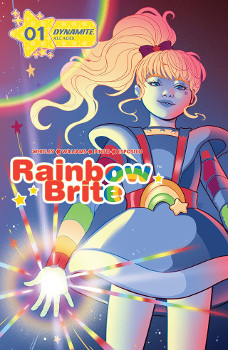 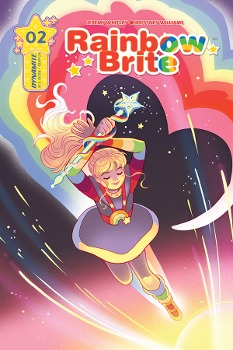 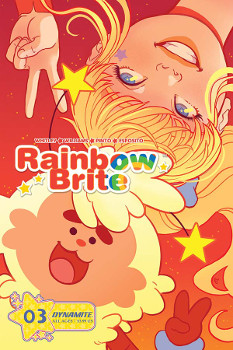 Dynamite doesn’t usually put out books that I enjoy, but they got a killer team on this title who nailed the right tone for Rainbow Brite. Which is especially important as this is a child’s property. Whitley and Williams both have the previous resumes to back up their skills, their earlier choices in their work, and their intentions here are the right fit for the right audience.

Tone-wise, this book is about the friendship of Wisp and Willow, who are little girls. We don’t know how old they are supposed to be. In the 80’s cartoon, they were supposed to be 4-years-old, but I think they’re a tad older, but still elementary school age.

The world’s set up starting in the girls’ imaginations and play. Wisp desires to be a warrior, and Willow is a wizard. Both of them are saving the princesses instead of playing the princesses themselves. Wisp sees herself having rainbow colors in her hair.

I liked how their parents were there but in the background. Each child’s personality shows a bit in their familial structures as well. And it’s important that Willow, a little black girl, has two engaged parents and is seemingly comfortably middle class, while Wisp, a little white girl, is being raised by a single mother, who we see passed out on the couch from exhaustion. Details like these, yes, are for character setting, and probably me, an adult, notices them more than children, but these are the signals we pick up and interpret in how we view groups of people.

The villains are stealing the color blue. Super kiddo appropriate, but the rest of the book isn’t so childish that a middle reader would consider it too young.

My only complaint is the design of the Sprite. Its ears and chin are so odd. It doesn’t look friendly. Given Williams’ design style, I’m pretty surprised to see the Sprite less round, less cute than they usually are. They look like old men or the Little Miss Sunshine characters when they have their hands on their faces.

I hope that Willow joins Wisp in the magical world soon.

There was a lot of exposition in this story about Rainbow Land. On the one hand, it was a bit of a slog, and I get it also may have felt that way because I’m not the target age demographic here. But on the other hand, I realized how much I did not remember about Rainbow Brite and her entire purpose. (Also, she and She-Ra kind of are the same characters. But I guess this is a chosen one narrative.)

I missed Willow a lot in this issue. Her and Wisp’s friendship is so beautiful, and I want more of it.

I adored Twinkle correcting Wisp about their name, and then Wisp explaining to them what nicknames are. And now Twinkle wants to be called Twink. That was adorable.

Williams’ art does knock the book out of the part. The ending scene where Wisp transforms into Rainbow Brite was magical and beautiful. The design layout was perfect, and how it displayed on the page just popped to life. It made the issue.

Way less dialog in issue #3, and I appreciate that. Also, Wisp’s actions are those of a child, and that’s what makes the perfections in Whitley’s version of Rainbow Brite, along with Williams’ on-point art.

Of course, Wisp tries to make friends with the monster. And she can help the doggie in the end even if she doesn’t have enough power to heal the rest of the shadow dog pack. Though one dog being cured would paint a target on its back.

I wasn’t expecting the Red Guard, Red Flare, to be human. Again, I don’t recall a ton about Rainbow Brite, and I guess this is where the other humans are in the story. I wonder how old Red Flare is supposed to be.

I still do want Willow to join our adventures. The pacing of this is well done, except in that it looks like the series got canceled and this book isn’t going to be more than five issues long. I worry that Willow won’t be part of it.