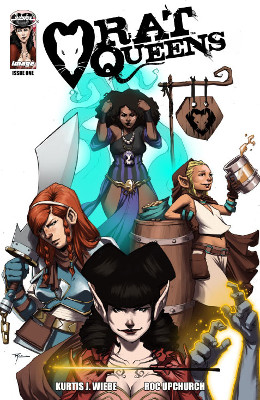 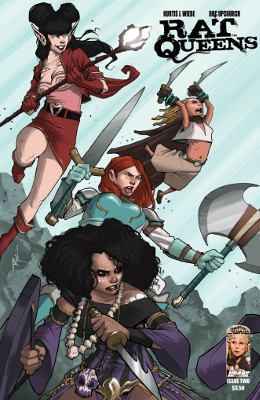 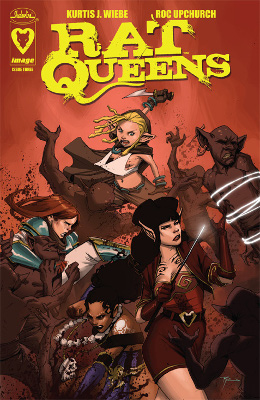 I’m very late to the party. Rat Queens is very fun, but not exactly what I was expecting. That’s not necessarily a bad thing.

Hannah and Dee are currently my favorites. I always do like the leader-type women.

It’s fun to see how this battle against the assassin showed off their different skills. It was a great introduction to the characters. Clearly, this assassin(s) has been hired to clear all the bad influences (or perhaps the town’s protection) out of the Palisades.

The comment about men always liking tentacles was hilarious. Also that it was a giant troll creature that actually killed the assassin, not them. It fits the brand of incompetency that is the Rat Queens.

Rat Queens continues to be delightful. I’m happy that the characters quickly figured out that they were being targeted and hunted by assassins. And figured out by whom. Or so Hannah and crew think it’s Mayor Kane. Mostly Hannah.

Seeing the contrast between Tizzie and Hannah was interesting. In how much they’re alike, but then how much they consider themselves vastly different from each other. It’s like fake conflict between women. Hopefully, they’ll figure that out before Tizzie dies (or at least I’ll assume that the Rat Queens are going to be around for the run of this book).

Sawyer certainly has some problems. Besides his crush on Hannah and trust in Mayor Kane. Can’t wait to read the next issue.

I very much enjoyed how deep this issue dug into getting to know more about all the other characters. It easily gives all the women a bit more dimension to them and what they’re about.

Seeing Betty get dumped by her girlfriend was truly sad. And interesting that she didn’t want to share with her friends, even if they thought something was off because of her dress. Maybe she’ll have better luck in love.

Hannah and Sawyer’s flirtations are too cute. There are definitely some boundaries that they crossed, and he has it really bad for her. Sawyer isn’t going to be able to let someone kill Hannah without either letting her take care of the situation or trying to help. He knows he’d be much sadder if she died than if the whole town went down in flames.

Loved Dee’s explanation about her powers. She is indeed a goddess in her own right.

Vi sending her brother away is going to bite her in the butt. And also not telling her friends more about it. Barre Blackfordge doesn’t seem like the type of guy to just leave quietly. Now I also want to know what Vi does to keep her beard from growing.

The last page with Betty, Old Lady Bernadette, and the assassin is just cracking me up. Loved the mistake that Betty made, her calling Bernadette old at 39, and it being Bernadette paying that assassin to take out the surviving adventure parties. I laughed a lot.

Punch out your feelings with the Rat Queens, and buy Rat Queens Volume 1: Sass & Sorcery