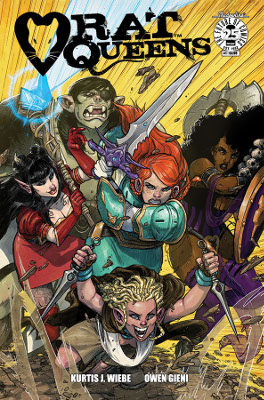 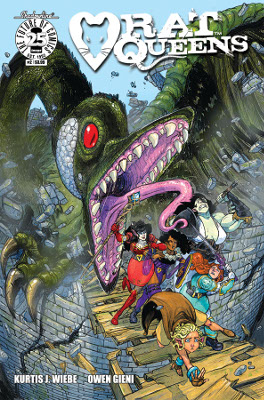 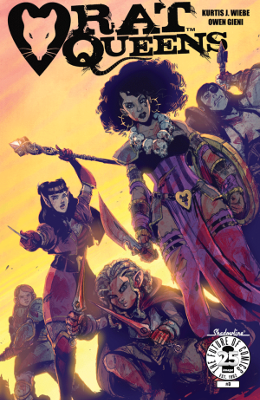 So I picked this up. Or more like it ended up in my to-read pile because my partner bought it for me thinking that because I’d read the others, I’d want to continue.

Well, the problem is a lot of things.

Gieni’s art, while not bad, felt kind of staple fantasy. Like 70s and 80s staple fantasy with less gratuitous tit shots. It made me miss Tess Fowler so much. Gieni doesn’t have that magical touch that brought the Rat Queens alive. And he doesn’t quite understand fashion. Even the gender switched Cat Kings weren’t smooth enough to actually think they’d be any competition to the Rat Queens.

Perhaps we missed a few steps. Perhaps Wiebe painted himself into a corner that he no longer wished to be part of. Maybe there’s story out there somewhere I missed. Maybe he’s planning on taking us back in time to see how things actually went.

That’s a lot of maybes.

This isn’t any better. I’m still not a fan of Gieni’s art. It reminds me of fantasy illustrations circa the 1980s.

Of course, Betty was the one who figured out how to take down the giant bird-lizard creature. The others were just hanging on for their lives. And then through the crash landing.

Seems like Barrie just really wants friends. I did find it amusing that the fungus guy cannot handle alcohol. It makes perfect logic.

Hannah definitely has powered up. And since when is she okay with everyone seeing her horns? Was it really just vanity?

This cult seems really bad. Dee needs to get with it and figure out how to eliminate the problem. I’m so sad about Orc Dave being part of the cult instead of being with Violet. Of course, this is yet another plot point we didn’t know until now. Sometimes I think this book is actually narrated by Betty.

This entire Rothfuss story just seemed like a ploy to sell some comics with Rothfuss’ name on them. It’s a Betty is high joke. It’s a tired joke. It’s a story that has no ending and makes as much sense as a story someone who’s as high as Betty would tell you.

The Cult Hunters are kind of fun. They are definitely going to be needed in the Palisades. There is some cult activity happening ever since those cthulhus attacked. Though the Rat Queens may have to eventually save the townspeople from whatever spell they are under, plus Cult Hunters. This is a much better plotted issue than the first two.

Gerard having ghost sex with Hannah’s mother was hilarious. The best part was the unique reactions from each character and how much Wiebe understands their different personalities.

Of course, Betty’s the only one who’s getting lots of sex. It makes sense.

The Mark and Bentley aside was hilarious. This is a Grindr date gone wrong.

Of course Barrie and his crew run into the Rat Queens on the mountain. It wouldn’t happen any other way. Barrie just wants to hang out with his sister.

I seriously haven’t laughed this much in a very long time. It makes zero sense given how the characters feel about each other, and I’ve never seen a sandy beach in this comic, but it’s funny.