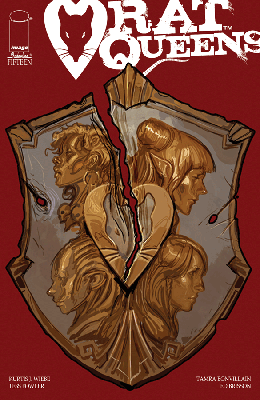 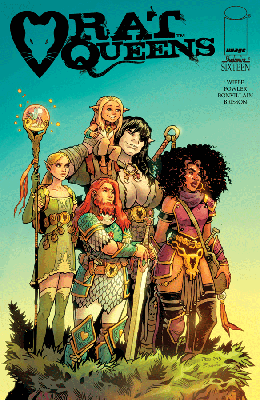 No! I have such strong opinions on this issue. Mostly that I just hate when friendship dissolves. No! The time jump will make the next issue really interesting. Somehow I don’t think the Rat Queens will be apart for very long.

Oh, Hannah. Senoa sure knew some powerful lies. Though his apparent death isn’t going to ever help Dee in trusting Hannah again. Especially since there’s no easy way to know he was working with the demon.

The change in Hannah’s look was super interesting. I liked Fowler’s redesign a lot. It felt so true for when women go through something big, they often change styles or cut their hair. I know I’ve done it myself before.

Betty has such a big heart. I loved seeing it. There’s definitely more to Violet and that sword which we haven’t seen.

The wizards are going to get their due.

Something funky’s going on in Palisade. Not surprisingly, our Rat Queens have discovered there’s something very wrong. So wrong that Violet killed Orc Dave when they were about to have sex. Unlikely that was actually Dave.

Somehow I think the creatures that Betty’s seeing while high may actually be real. At least that would explain a few things. Not to mention that you’d want to keep warriors like Braga around to defend the Palisade. Especially in light of all the nonsense that had gone on recently.

Dee just can’t run far enough to escape her family. Nope, now her husband’s in Palisade, just kind of waiting for her.

I assume Tizzie is our clue here. The causal comment about her being back so soon and her not really acknowledging that she’d seen the Rat Queens somewhat recently seemed suspicious.

I did really miss Hannah this issue.

Also, what the hey? This just ends here. And Fowler got kicked off? Done with this book.