This is one of those moments where we have to acknowledge the problematic nature of what we’re reading and continuing to choose to love (if love is the choice). By now, it’s well-known that Upchurch beat his wife in October 2014, and it’s hard to say how much you love someone’s work when they aren’t someone you want to keep supporting. I will continue to read Rat Queens, mostly because both Wiebe and Image Comics responded perfectly in an awful situation. Upchurch has been removed from the comic and will be replaced by another artist going forward. 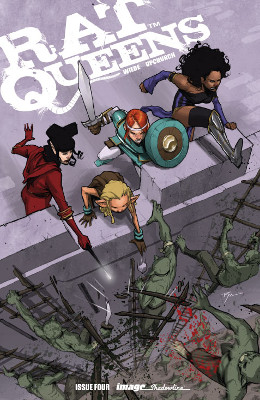 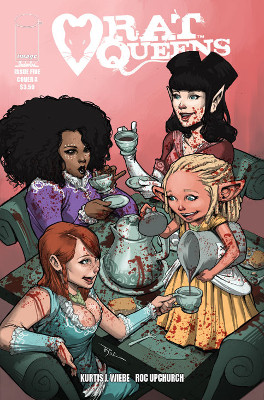 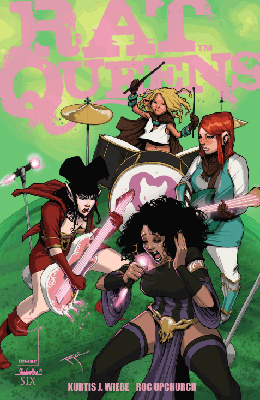 I think I’d rather have more character development instead of all this battling. Seems kind of insane, even if that’s your thing. Additionally, while I’m enjoying Rat Queens, I don’t think I love it like many other people do.

Perhaps it would’ve been funny if Betty had tossed Bernadette to those trolls. She was right that it was technically Bernadette’s fault. And automatically fighting for the city doesn’t mean responsibility and listening to Braga, the Orc, also doesn’t reek of responsibility. Even if it was funny how caught off guard Betty was.

I liked knowing that Sawyer has some superpowers of his own and must be an ex-assassin. Which might explain why he lets Hannah off the hook so much (minus the giant crush part).

It was great to see everyone actually join in the fight. The Rat Queens would’ve been slaughtered without support.

Orc Dave and his bluebirds was pretty adorable. I like how Vi comes right out of being passed out and then goes into lecturing them about treating Betty better. Sadly, as much as Vi’s correct about Bernadette being taken care of, I don’t think she quite meant this way.

Betty and Faeyri are still adorable together. I also loved her making her dangerous candy drinks. And then Hannah out smoking the one lady to go flirt with Sawyer. Loved Dee hanging out with a giant book and ignoring all the partying.

I’m really excited about the next issue as the religion Dee’s been escaping has come back to haunt her. Not that Gerrig knows that. And how he’s clearly getting in over his head. Sounds like perhaps Sawyer did a bad thing when he was an assassin.

This is my favorite Rat Queens to date. I love what these interactions between the women tell about their own personalities, and this issue kept the plot moving at a strong clip.

Yeah, Hannah’s definitely my favorite character so far. So angry and so perfectly self-sabotaging. She clearly is afraid of an unknown future — or just wants to punch it in the face. Hannah is also really bad at having relationships in a special commitment phobic way. I identify. Her calling out everyone for being so happy when there was clearly still shit to take care of was great. Same with them calling her out for sleeping with Sawyer.

The jokes about Gary are now starting to make me laugh.

Breaking the penis off the Gift of Palisade was pretty hilarious. Oh, Vi. I liked how she was trying to say that she was sober and also that the Mayor didn’t care. (I do think a nice little art touch would’ve been those magical bluebirds, no longer in Orc Dave’s beard, perched on the statue.)

I’m digging Lola as the logic to Sawyer’s heart. Also the person he trusts to do the things. I’m hoping she’ll continue to be in the book.

Gerrig has definitely changed. Also, while the reveal of what he did to Bernadette is super freaking scary and dramatic at the end, it seems odd the Sawyer wouldn’t take off her gag and blindfold when he finds her. It’s not like Sawyer really understands what’s going on. He think he’s going to fight an assassin. And then the tentacle monster comes up from his belly. Creepy ass powers, Gerrig!

Good thing Dee knows how to solve the problem with her newly introduced husband, Mezikiah.

That last scene is so scary!!!