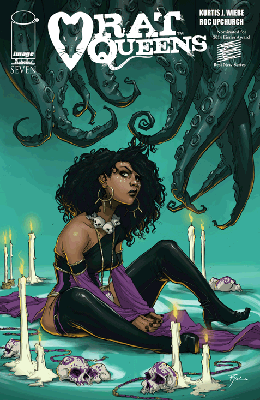 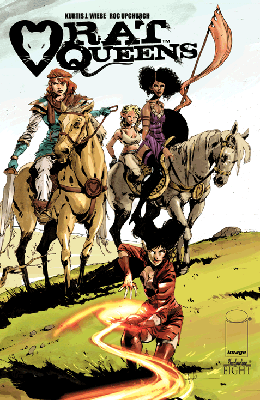 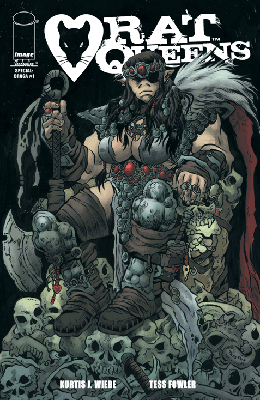 I wanted more Lola scenes, but I didn’t really mean like this. I do appreciate that she’s so incredibly badass that she can take out an entire gang of guys trying to kill her by herself. Oh, Lola. She also doesn’t trust them not to kill her before she can kill them. That’s probably a good idea. Lola is the cop that will put two and two together.

Unlike Sawyer, who’s naked and being tortured. Also Gerrig is clearly keeping him alive for the grand finale, and in that I think Wiebe’s planning on keeping Sawyer around.

Mezikiah kind of read that scroll too late. Of course, it was perfect Rat Queens for them to really miss things before they got superbad. Such as Sawyer not being there. And only trying to heal Bernadette, while ignoring everything else going on around them. Until the kraken come from the sky anyway.

Loved this story about Violet coming to age and coming into herself. Of course, her brother Barrie gets to play champion for the family. And I adored the twist that she came from a very wealthy family.

Interesting to see her inspired by Morgan Meldhammer, the only women in the tournament and who shaved her beard. Also liked the shout-out to the rat as an icon.

The scenes with Violet and her mother were the most touching. I loved the look of horror on Violet’s face when her mother found her cutting off her beard, and then her mom telling the story about how she’s so proud of her girl becoming a woman. While at the same time, realizing her daughter needs to come into her own and helping her close shave the rest of her beard.

I am wondering if Hannah pulling her through the mirror is actually how they met, or if it’s just a vehicle to get a knocked out Violet back into the story.

I didn’t think I could love Braga more as a character, and I’m so happy that her story got her own very special issue. She is definitely my favorite Orc. Everyone, take note: this is how you do a character study in a single issue comic book.

Love that Braga was supposed to take over for her father as chief of the Orcs. I adored that Wiebe focused on her outsiderness as her willingness to be a diplomat and strive for peace and learning — even if she admits to Orc urges to kill and fuck — and that’s what makes her different. The tease that she only discovered herself as transgendered after she was out on her own and being herself was wonderful.

Kiruk being killed was kind of inevitable, but very sad. I do wonder what Kiruk would say to Braga if he was still alive.

Even though Voon was a huge asshole, I do appreciate that Braga didn’t want to kill her brother. That she would’ve preferred that he just move on with his life and let her leave. Fowler does a great job at putting Braga’s grief and rage on her face, but also the sadness murdering her brother.