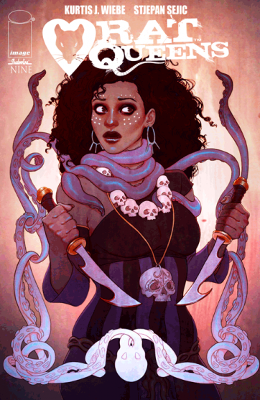 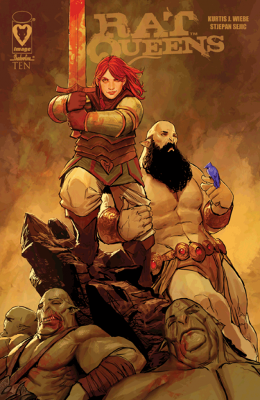 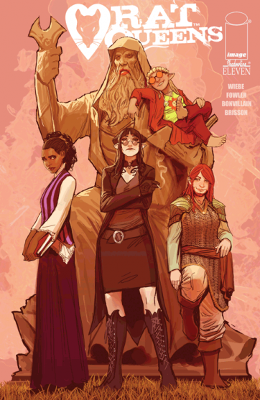 Okay, not sure how much I like Sejic’s art. I mean, it’s okay, for the most part. It’s certainly better than what I saw when I google image searched his art. Seriously, if I was an artist, I’d be working on my image search fu, or just you know, not have drawn some weird “boobs” and posted them on the internet and printed them in books.

Actually, I’m only struggling with three aspects of the art.

1) How Sejic draws adult Hannah. It’s like he can’t quite figure out the angles of her face and has gone for many.

2) How he draws the portions of both Hannah’s and Violet’s bodies oddly. Like there was one panel where Violet’s body was incredibly short waisted, even for a dwarf, and another where Hannah’s shoulders were filled with Dynasty-style shoulder pads.

And 3) his coloring of characters of color, specifically Sawyer. Sawyer seems a way lighter shade of brown than he’s previously been portrayed as.

While I wish Sejic all the success on this book, I still wish that they would’ve found an artist of color and/or a woman for Rat Queens.

Okay, let’s talk about the story. Little Hannah is adorable, and you can tell exactly where she gets that attitude from her mother.

So they’re not supposed to look at the kraken? Or get too close to them? I’m not really sure when the kraken and their powers overwhelm people.

The line about Sawyer’s penis distracting Hannah was pretty classic.

Now that we’re all on the same page, it’s time to go save Sawyer and destroy that Gerrig guy. He seems like a big jerk.

I’m slowly adjusting to Sejic’s art style. I’m not sure if I’ll ever be fully onboard; however, it was less distracting than the previous issue.

I can’t wait for more of the Rat Queens in their university days. Loved seeing the origins of Tizze and Hannah meeting, and how Tizze was keen on being Hannah’s friend. Also that Tizze was clearly more innocent back in the day.

Super interesting reveal that Hannah’s hair style is to cover up sawed down horns. (Or perhaps cut off.) I would’ve never guessed that at all. The contrast of Hannah saying that mages could turn themselves into anything and her covering up horns with hair, not magic, was very slick. Oh, Sawyer, oh, Hannah, please tell me more.

Dave and Violet are the cutest in the entire world!

Glad to see it was Dee who took out the kraken. She needed that. Even if she was unconfident that she could do it without the Rat Queens backing her up.

So Gerard is basically Sirius Black from what I’m getting. Though the art for his invading force of mages to overthrow the magic council also kind of reminded me of Star Wars, which I don’t think any of the Rat Queens are Luke Skywalker. Maybe all of them Han Solo or Leia.

Remember, never eat the green candy. It was fun to see them take on the goblins, and also nice to see them reflect on the prison escaping (and prison keeping) techniques that they learned from the many times Sawyer locked them up.

Loved seeing Fowler’s art back on this book. She does a great job in particular with their snow gear. I also love that observation that Violet’s beard would’ve grown back while on their adventure as it takes maintenance. The blue bird from Dave was a nice touch too.

Oh, Betty, I don’t think her candy bag’s going to get her out of this one.

Take down the kraken in Rat Queens Volume 2: The Far Reaching Tentacles of N’Rygoth.