Dark Avengers #3 by Brain Michael Bendis, Uncanny X-Men #507 by Matt Fraction, and The Wonderful Wizard of Oz #5 by Eric Shanower 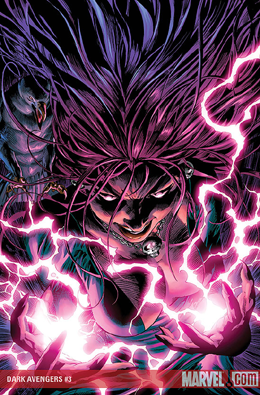 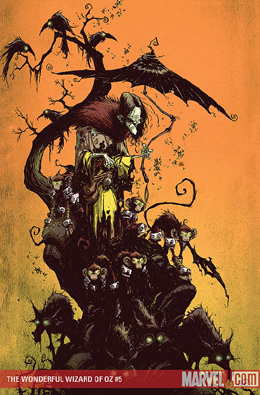 I really love how Norman Osborne deals with the Sentry in this issue. In many ways, despite his obvious psychoticness, he is correct in how the others have treated the Sentry. They don’t treat him as human, and he doesn’t act like it. (His wife constantly sleeping in the background is so freaking creepy.) While I don’t think Bob can get over being nuts just by acting “normal,” Norman is very correct that a routine will help the Sentry.

I’m not sure how much I care for the Morgana Le Fay plot line, probably because I’m not a Dr. Doom fan. But it is fun to see super villains fight each other for a change of pace.

Finally, Colossus is over his manpain. Or you know, a “I <3 Kitty" tattoo has solved all. I do love the contrast of Scott's "You can be emo, Colossus. I totally understand like the many times I was over my spouse(s) and kid(s) death(s)" compared to Emma's "Everyone has pain, we share, and then heal together" method.

While the main "points" of this comic were big fights to end two different story arcs, it was the subtle flickers of future plots that I enjoyed the most. Emma delivering her sentence of sharing to Sebastian Shaw and the "brig" they're building. (That sounds like future bad news as prison breaks happen.) Scott telling the Mayor that they're building an army and a place for refugees. (Further moving Scott away from Professor X's philosophy of pacifism, plus the occasional mind-wipe.) And then there's Beast's collection of scientists, Angel flying away from Beast, and Magneto getting back his powers bam! on the ending.

The Wonderful Wizard of Oz #5

I loved this issue. It was exactly everything I’d hoped for, especially given my thoughts on issue #4. Of course, the defeat of the Wicked Witch of the West shows how each character has grown throughout the story and accomplished almost every wish they made on their own.

I think my favorite attack scene was when they take apart Scarecrow to use his straw to cover Dorothy and the Cowardly Lion to hide from the bees, which the Tin Woodsman bends all the bees stingers when they try to sting him. 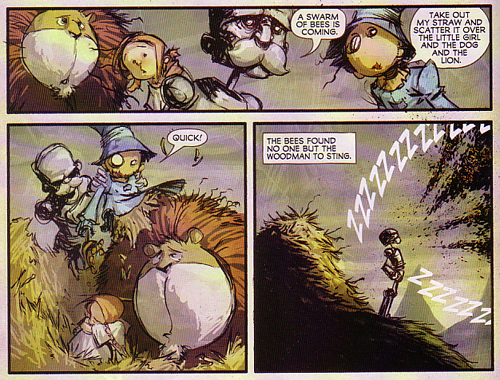 I was kind of surprised to see them slaughter all the wolves and the crows, but I suppose that children’s books have always been darker than we like to think they are.

It’s great to see how much Dorothy’s innocence is kept in tact while she still kills the Wicked Witch of the West. Never get between a girl and her shoes. Especially shiny silver ones.

Scottie Young’s art still remains some of my favorite current art. It’s so fun, but can be scary. And it immediately transports the reader into the story with setting the mood and the atmosphere. He’ll definitely be an artist I’ll be following.