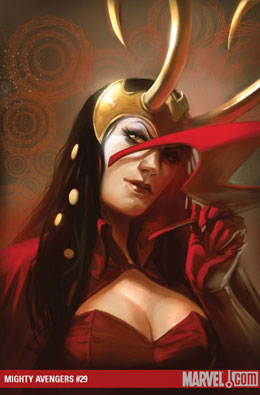 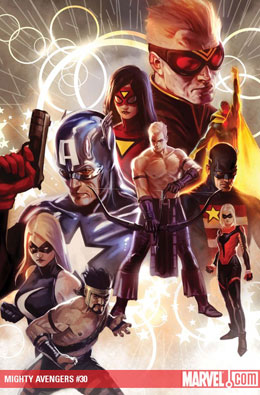 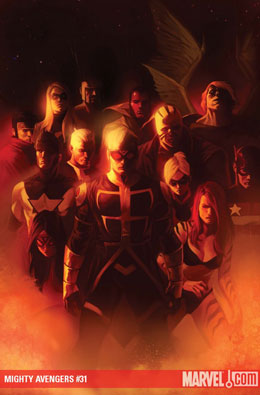 The Mighty Avengers #29 by Dan Slott and Christos Gage

Clint figures out it’s not Wanda by kissing Loki. WTF. This kind of ruins my love for the New Avengers issue where Clint and Wanda do hook up.

I’m still trying to figure out why I should care about a plot that’s clearly going to be focusing on the redemption of Quicksilver and Hank Pym. I don’t like either. (And I’ve read them in many different eras from their first appearances to current stuff.)

I really want to see more of Slott’s character-building. And I’m just as creeped out as Jarvis by Hank and Jocosta’s “relationship.” Yes, because clearly, she’s now his mother/wife/programmed to love him forever girlfriend with his dead ex’s brain patterns. I’m surprised this is coming from Marvel’s last funny writer. Unless it’s all leading up to a joke by Amadeus.

The Mighty Avengers #30 by Dan Slott and Christos Gage

Again, I think I’m just having a problem with Hank Pym. Especially him as Supreme Scientist. What the hell? Am I supposed to take this plot seriously? I have absolutely no interest in his redemption or having sex with robots. (Somehow I’m going to find a way to blame the latter on Joss Whedon.)

I do like that for once a man’s shirt is destroyed to artfully show his hotness. Oh, Clint. (Though the cover is ridiculous and ugly.)

I love the scene with all the Avengers and everyone being excited to be around Jarvis.

I do find the idea of the non-human characters being the ones to take down the Unspoken very interesting motivation-wise. Unless you believe they’re all extreme heroes who compulsively put themselves in mortal danger to save others. However, I have a feeling this is all going to be ruined by making Hank Pym the coolness.

The Mighty Avengers #31 by Dan Slott and Christos Gage

Yeah, I’m going to have to drop this book. (And just my luck, my Marvel subscription ran out.) The writers really really really love Hank Pym. Seriously. In the “you’re so amazing” interactions Hank had with Bucky and Clint, both Bucky and Clint were horribly out-of-character. (Though Bucky was off the entire time. Yes, he’s a character from the 1940s, but not out of Leave It to Beaver.)

Again, I really like the bits with Cho and Hercules (who saved the day compared to Hank who basically killed the Unspoken) and the parts with Cassie and her interactions with Clint and Jonas. They all worked and were very interesting.

I think the worst let down was Ban-Luck and U.S. Agent not hooking up. Instead, they said goodbye and she went back to China and he to the Infinite Avengers Mansion. Dammit.