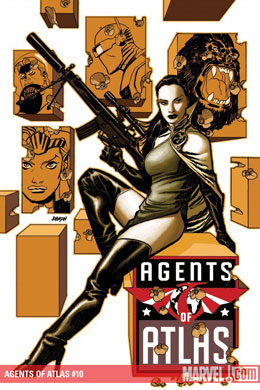 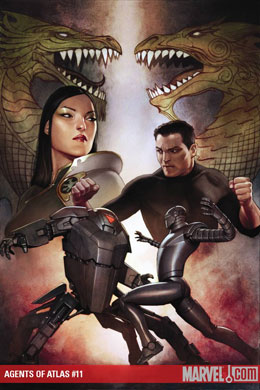 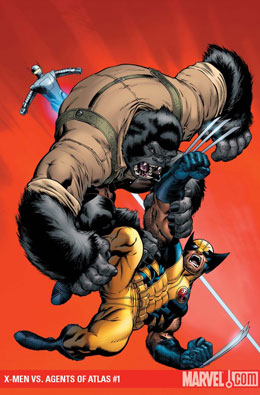 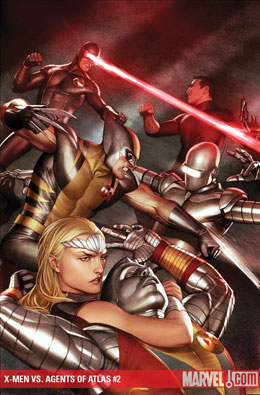 Agents of Atlas #10 by Jeff Parker

This issue reminded me a lot of 2007 miniseries. Mostly because it revolved a lot more around Woo and his love of Suwan. Of course, now she’s his main arch enemy with a dragon adviser of her own.

One thing I really like about this comic is that Parker has made dragon advisers part of the history of all peoples back to the Middle Ages and earlier. It gives a lot more context and sweeping story to Agents of Atlas. It’s nice to have scope in a comic.

The introduction of Dr. Zu was rather hilarious. I love the banter between him and Hale. Mostly the part about Zu asking Hale if he was from the animal modification labs, and Hale informing him no, but he’s going to shut those down.

I feel sorry for Bob. He’s a little overwhelmed, and I’m betting after Woo, Bob is going to be deemed the weakest link to exploit on the team by Suwan.

Poor Woo. Not only does he not remember the last 50 years, now he has to go against his super pissed, maniacally evil ex-girlfriend, who does remember him and all those years.

This thing with the real Venus coming after Venus looks to be mighty interesting.

Agents of Atlas #11 by Jeff Parker

I love this book so much, and it saddens me that it’s ending, going on hiatus, or whatever.

I was a little disappointed that everything seemed to wrap up so well. The Jade Claw’s plans seemed more robust than to be easily destroyed by a firefight with the team and an exploding satellite. Granted, I’m sure Parker was just wrapping up loose ends.

M-11 is beyond awesome, same with Namora. Parker used all their powers perfectly. Especially since Woo was still distracted by Suwan. I love Ken telling Woo they’d won the battle.

X-Men Vs Agents of Atlas #1 by Jeff Parker

Anyway, I love how they can’t ask to borrow Cerebra or have the Cuckoos run it to look for Venus. (And yes, the Venus plotline is going forward! Haha I love that the Centaur is glamored to be a Mountie on a horse. Win.)

No one should really take on a killer robot with a grudge. M-11 is so going to melt Wolverine over and over again.

The back-up story is just adorable. I love the wee X-Men fighting against the Agents. Of course, I don’t really see how adults with their more developed talents can be bested by still-in-training teens who really relay on making too much snow in the jungle.

X-Men vs Agents of Atlas #2 by Jeff Parker

Of course, Namor comes to save the day. He does have a loud and commanding enough voice to stop all the fighting. Though I’m surprised Lao stopped blasting them with his dragon fire so quickly. Usually, he likes to give just as many airs as Namor. But then dragons are the ultimate strategists and the alliance with Namor is a good one.

I’m not sure how I feel about Atlas’ encounter with the in-training X-Men being just a dream or mindscape. I mean, obviously, something was up when Namora appeared at the end of issue #1. It does explain why Venus’ powers didn’t work properly. I thought Parker put Xavier in an interesting role here; especially given how discarded Xavier’s been in recent years (or just how much of a jerk he’s been), Parker’s use of him really shows Parker’s own adoration for the character.

Poor Venus really bit off more than she can chew. But at least she has her friends. And I believe Aphrodite will find that worshipers aren’t as devote and loyal as a good group of friends. (I did enjoy the Venus statue joke.)